Minister Beatriz Artolazabal: "The euthanasia debate, in the Homage to Mr. José María Lidón, the best way to bring to life the memory of the Magistrate and defend his values"

Embed video
Download mp4 video set (zip)
Minister Beatriz Artolazabal: "The euthanasia debate, in the Homage to Mr. José María Lidón, the best way to bring to life the memory of the Magistrate and defend his values" Source: Irekia 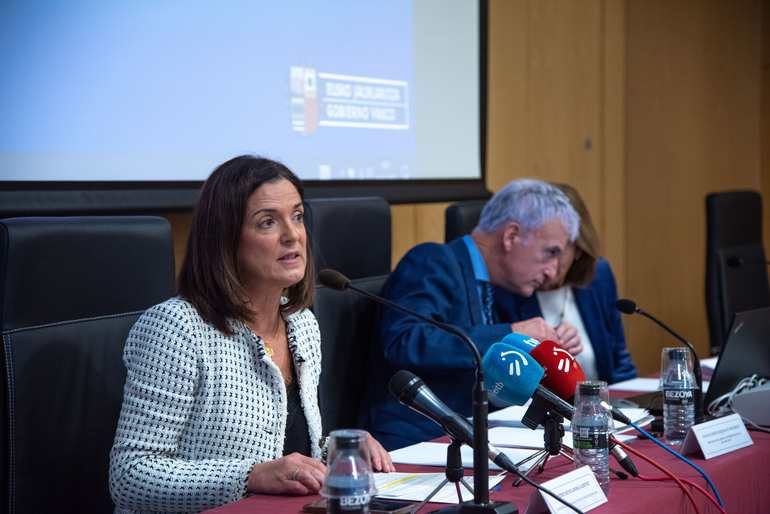 The Minister of Equality, Justice and Social Policies of the Basque Government, Mrs. Beatriz Artolazabal, considers that "the debate on euthanasia as the central theme of the XVII Symposium in Homage to José María Lidón, constitutes the best way to bring to life the memory of the magistrate and defend their values by following their example”.

The XVII Conference in tribute to the Magistrate José María Lidón -with the motto "Euthanasia under debate"- takes place in the Palace of Justice of Bilbao. Today, Thursday, after speeches, a roundtable will held Round that analyses the "Ethical perspective and delimitation of concepts in relation to euthanasia". The people who intervene are María Jesús Goikoetxea, doctor in Human Rights from the University of Deusto and Elena Gutiérrez Alonso, Doctor and Master in Bioethics from the Complutense University.

“José María Lidón's passion for committed Law at the service of people has been reflected, year after year, in the topics chosen for these Conferences. Lidón was assassinated for representing the values of Law and Justice, what better way to bring his memory to life than to defend these values by following his example!” Beatriz Artolazabal has commented.

Artolazabal has recalled the figure of Magistrate Lidón “vilely assassinated by the terrorist organization ETA on November 7, 2001. She brings us here the memory of him: passionate about Law and teaching, he took time to guide his students. 21 years have passed since his death and his memory is still alive in society thanks also to these annual conferences”

“It is important not to forget those who left. Keeping alive the memory of José María Lidón and the other victims of terrorism and all human rights violations is a moral obligation of Basque society. Forgetting him would be like becoming an accomplice in the injustice of his murders” Artolazabal insisted.

“The recognition of the victims of ETA terrorism and the preservation of their memory is an act of justice and also has a political significance that is specified in the defense of everything that terrorism tried to eliminate in order to impose its totalitarian and exclusive project. This is how the Basque Law of Recognition and Reparation for Victims of Terrorism expresses itself, which adds that the future of our coexistence must be built on the memory of the victims,” added Artolazabal.