The intervention of Iñaki Susaeta in the nrg4sd side event, COP 22 Marraketch 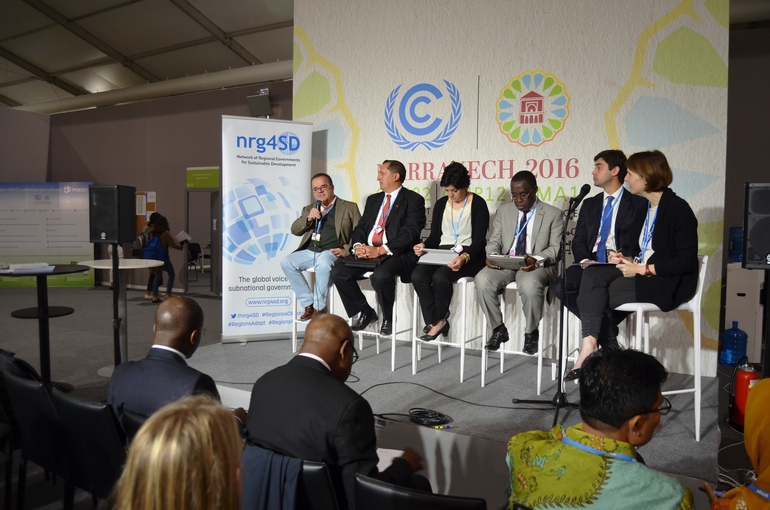 Thanks you for giving us this opportunity to share with you our objectives and some of the actions that are being carried out in the Basque Country.

The Basque adaptation roadmap to 2050 has been developed taking the two objectives of the Basque Climate Change Strategy into account:

The first: to cut greenhouse gases in the Basque Country by at least 40% by 2030 and by at least 80% by 2050, compared to 2005 that is more related with mitigation mechanisms and the second to ensure the resilience of the Basque territory to climate change fully linked with adaptation policies

The Basque Country adopted the commitments of the Regions Adapt initiative next year during the Paris conference.  In this year we have been working on different aspects that I would like to share with you.

First I have to say that we are integrated in the working group dealing with Flooding risk, within the Regions Adapt strategy, this aspect is being developed by URA the Basque Water Agency, and you will have the opportunity to hear about in a side event, today at 13:00 pm.

Anyhow I would like to nominate also some of the other projects that are being carried out regarding adaptation in the Basque Country. We call them “best practices” and we have some copies with the complete information, available.

NEIKER-Tecnalia, a research institute of the Basque Country has developed regional climatic scenarios. Regional climate scenarios are very needed to assess the vulnerability an impacts in different sectors like construction sanitation, agriculture, Hydraulic management and in the definition of measures of adaptation to climate change

The Basque Center for Climate Change (BC3) has carried out the project OSATU to support the institutions of the Basque Country in the planning and implementation of prevention plans on the health effects of heat waves.

Include the NBS methodology, as adaptation measures in the Adaptation Plans for Climate Change of municipalities in the Basque Country.

We do have a programme of restoration of marshes and dunes as an adaptation measures against the rise of the sea level.

It should be noted that 58.18% of the area of the municipality is forest and 23.65% of grasslands. Forest management based on increasing heterogeneity, biodiversity and complexity of the forest allows an increase of forest resilience.  Anyhow let me share with you this reflexion: In the past  emission mitigation issues were considered as something more global and adaptation to the impacts as something more local, we do know now that climate policy requires an integrated view of those two aspects at all levels. Mitigation and adaption are important from the global to the local level.