The University of Illinois hosts a seminar to showcase Basque literature 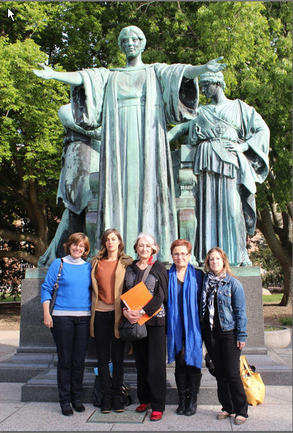 The University of Illinois yesterday brought Basque literature and its current situation to students and professors, thanks to a collaboration between the university and the Etxepare Basque Institute.

"We are delighted to bring the reality of Basque literature to the University of Illinois and that two Basque authors can share their first-hand experiences with the people at the event," stressed Mari Jose Olaziregi, Director of the Promotion at the Basque Language of the Etxepare Basque Institute.

This outreach took place during a round table entitled "Basque Fiction: Utopias and Challenges". During the session, the writers Arantxa Urretabizkaia and Eider Rodríguez described their experiences as authors in the Basque Country and, above all, as ones who write in Basque.

On the other hand, Eider Rodríguez stressed the importance of using Basque to promote the language and guarantee its future. Nowadays, 100% of Basque speakers speak Spanish. And that percentage means that some people would think it more practical for me to address the world in Spanish," commented Rodríguez. "However, every time I miss the opportunity to speak in Basque, a particle of the language vanishes. A tiny, small one, an absurdity, I assume. The same particle of dust, the same absurdity that we are for the universe."

Blanca Urgell, the Basque Government's Minister for Culture also attended the round table as she had travelled to the city of Champaign-Urbana to attend this event Both the Minister and Director Olaziregi, Urretabizkaia and Rodríguez were warmly welcomed by the Basque students at the University of Illinois, who recited the following verse to welcome the guests: "Idazle maiteak/ Guk bertso bat dugu/ Eskerrik asko zuei / Esan nahi dizuegu/Hemen gu euskarazko/ Ikasleak gara/ Ongi-etorri zuei / Champaign-Urbanara".