The Univesity of Chicago inaugurates the Koldo Mitxelena Chair 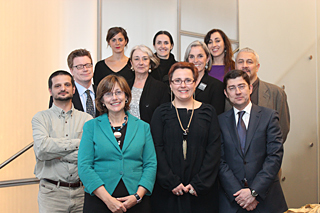 The University of Chicago and the Etxepare Basque Institute yesterday inaugurated the Koldo Mitxelena Chair of Basque Studies and named in honour of the Basque linguist of the same name. It aims to promote and disseminate Basque culture in North American universities.

"Koldo Mitxelena never came to the United States," explained the Basque Government's Minister of Culture ,Blanca Urgell, who had travelled to Chicago for the ceremony. "Nevertheless, he has made his own mark, on his own merits, on this prestigious university."The inauguration of this chair is the ultimate tribute that has so far been paid to this Basque speaker, linguist, and thinker that converted Basque studies into a set of professional disciplines and to whom the Basques keep trying to repay a little of what they owe him", concluded Urgell.

Each academic year, the Koldo Mitxelena Chair will be occupied by a renowned Basque professor who will give classes during the semester. Lourdes Oñederra, full professor of Phonology at the University of the Basque Country, is the first incumbent of this chair "Oñederra is not only a member of Euskaltzaindia, but Koldo Mitxelena himself supervised her dissertation on Basque phonology", explained Mari Jose Olaziregi, Director of the Promotion of the Basque Language of the Etxepare Basque Institute.

Yesterday's programme ended with a round table led by the Basque authors Arantxa Urretabizkaia and Eider Rodriguez, after the opening of an exhibition by artist Erlea Maneros Zabala at the Reva and David Logan Center for Creative and Performing Arts of the University of Chicago. "Logan Center is the tallest building on campus and was created to celebrate art and culture from around the world, "said Bill Michel, Executive Director of the Reva and David Logan Center. "We are delighted to have the work of Erlea Maneros on show here and to bring the art of this artist of Bilbao closer to the people of Chicago".

The events to mark the inauguration of the chair have been jointly organised by the Etxepare Basque Institute, the Cervantes Institute and University of Chicago.. The events will be held in different places of the State of Illinois between 9 and 22 April and they will all be free and open to the general public.