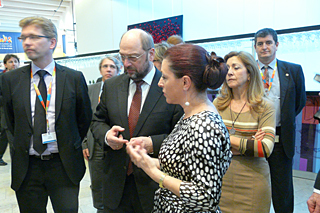 The President of the European Commission, Jose Manuel Durao Barroso, rates the Basque Government's transfer of the Europe 2020 strategy to the regional reality of the Basque Country very highly.

Proof of this could be clearly seen when the President of the European Parliament, Martin Szhulz, expressed his desire not to leave the congress venue without seeing for himself the Basque experience at the Sustainability Strategy-Ecoeuskadi 2020 exhibition at the V European Summit of Regions and Cities.   Szhulz expressed special interest in the governance model deployed to construct the strategy, which will remain in force throughout the period to implement their lines of work. In particular, the specific process where young people are involved in defining the new sustainable development model co-creatively, is in line with one of the main issues discussed at the Summit and included in its conclusions.

Virginia Múgica, in charge of EcoEuskadi 2020, has been taking part, along with the General Secretary for Foreign Affairs, Guillermo Echenique, at this international summit, at the head of a Basque delegation. Today's work session approached "How to involve citizens in regional and local development projects".

Basque representatives took the opportunity to go over the contents of the strategy to the Chair of the Committee of the Regions and to the Leader of the Copenhagen Region, Vibeke Storm Ramussen, and to explain the way it was constructed, that is, with the participation of around 5,000 people (young people, social and economic stakeholders, and the general public) and 388 represented organisations.

The EcoEuskadi exhibition at the Summit will be open to visitors on 12 and 13 May, as part of an exhibition on sustainable development that the European Commission will set up at its Brussels headquarters, as part of the annual open days that are held to bring the citizens closer to the activity of the commission.