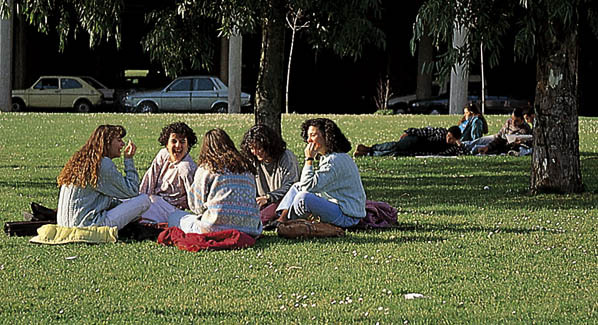 The Basque population said that they were happy and healthy, and scored very well (7.1 points)

The size of the relatives and friends network was 22 people, but there was no great cross-section of friends

The Basque population felt happy and healthy to a great extent, scoring an average of 7.1 points out of a maximum of 10, according to the Social Capital Survey conducted by Eustat.

Social capital is taken to be a resource that is accessed through broad personal networks by means of which a person actively participates in the different social and economic spheres, in an atmosphere of trust and which can facilitate social and personal development, together with the economic development of a society.

Specifically, in the survey conducted by Eustat, social capital is seen as a set of social participation and relationship dimensions, some of whose indicators are summarised in the following graph, with the average scores obtained. The questions in the happiness section considered health, satisfaction with life and income.

Therefore, happiness, satisfaction with life can be, and is, related to income, which is reflected in the fact that the social class is the most important variable. The maximum difference is between the value scored by the working (6.2) and the upper and upper-middle (7.7) social classes.

The relationship appears to be more diluted when the relationship with activity is considered, where the happiest people, along with the students (7.5), were the people who were employed (7.3) and the least happy were the pensioners (6.4) and retirees (6.8), which reflects the importance of health in their self-assessment.

The importance of variables such as the type and size of families reveal the impact of being alone when considering satisfaction, as childless couples (7.2) or those with children (7.1) were the happiest and single-person families (6.6) and residents in collectives (6.6) were the least.

The most related indicators are social cohesion and safety. Social cohesion revealed differences in happiness from 6.3 (low cohesion) and 7.5 (high cohesion), while they were slightly greater in the case of safety: from 5.8 (low safety) to 7.2 (high safety).

Large family and friends network, but with a very small cross section.

People in the Basque Country had an average of 22.5 people around them between relatives and friends, a dozen of whom formed the closest core with whom they have the closest relationship.

The type of family was particularly discriminating among the socio-economic variables, as childless couples had just over 24 relatives and friends, while single-person families had 18.7, while people who do not live with families but resided in collective establishments had barely over 14.

This was followed by the relation to activity, as pensioners had an average of 19.7 relatives and friends, while students exceeded 24.1.

This size is co-related to trust in the networks and therefore people that show little trust had fewer relatives and friends than the ones who were very trusting, and ranged between 18.3 and 24, respectively. Something similar happens with the happiness and health indicator, as the people who were very happy (23.5) had a wider network than those who very not very happy (17.9).

It could also be seen that a quarter of people had a small network (0-14), half had a medium one (15-29) and the others had a large one (30 and more). If you look at the latter, you can see that it varied greatly with the type of household and relation to activity variables, but others also played a part. Thus, the upper & upper-middle social class scored a 26.6% in high network sizes, compared to the 18% by the working class. Only 14.3% of people born abroad had a large network, compared to 26.5% of those born in Bizkaia and 24.5% in Álava, and temporary employees scored 7.3% compared to the 28.2% by entrepreneurs.

Now if only friends are taken into account, the uniformity or the cross-section of them were considered in the survey. For the population as a whole, the uniformity scored an average of 6.0, which means that nearly two thirds of people only had friends that were the same as them in terms of religious beliefs, nationality, social position or political trends.

On the other hand, it can be seen that mainly those people born abroad had the networks with the widest cross-section, for obvious reasons, along with university graduates, professionals and managers, the upper and upper-middle classes and entrepreneurs.

At the other extreme, people with primary or lower studies, those who took care of the household chores, were aged 55 years or older, unemployed, born in other provinces or were widowed, separated or divorced had the most uniform networks.

The trust shown by the Basque population varied depending on whether it was about people in general (5.8), the different professions (5.1), friend and family networks (6.9) or the institutions (4.7), with the latter scoring under the pass rate.

The institutions not only include the different levels of the Public Administration, but also trade unions, political parties, the police, the army, banks, the Catholic church or NGOS. The trust varied in each institution varied, from a minimum of 3.1 point in the case of the political parties or 3.4 in the army to a maximum of 6.1 points in non-governmental organisations, 5.6 in the Ertzaintza (Basque police force) and 5.5 in charity organisations, such as Cáritas. The intermediary values include the case of the trade unions (4.6) or the courts of justice (4.7).

In the case of the Public Administration, the greatest trust was in the Basque Government (5.4), followed by the Local Councils (5.1), the UN (4.8), the European Commission (4.7) and, finally, the Spanish Government (4.2).

People born abroad showed the greatest trust in the institutions (5.7), which also scored a pass mark with people born in other Spanish provinces, retirees, pensioners and people who did the household chores, those that have not continued beyond primary education and those aged 65 or over.

At the other extreme, there were the euskaldunes - taken to be those who answered the survey in Basque - adults aged 5 to 25, single people, support technicians, the employed, those born in Gipuzkoa and those that had graduated from university or completed vocational training.

The Basque population was revealed to participate highly in elections, with an average value of 7.6 which means that they had voted in 3 out of 4 of the last elections. It also expressed an interest in socio-political questions in the different spheres affecting it (5.8), but its political and social participation was low (1.2 points on average) and its participation in associations was nearly non-existent (0.8 points).

With respect to the participation in associations, only the managers and professionals, university graduates and the upper & upper-middle social class scored the average value of 1.

Apart from the clear relation between the socio-political participation and the participation in associations, which may be the channel or the reason for the former in some cases, a relation was also established with the access to the media indicator, so that both varied in the same way, from low (0.5) to high (1.0).

Abundance of sources and lack of information about public issues

The Basque population only considered themselves to be moderately informed (5.2 points on average) about the public issues that concerned them and this was despite the abundance of provincial information sources (7.5 on average) and the wide use of the media (6.7).

However, in 2007, the lack of Internet and virtual contacts could be noted (1.6 points on average).

There were notable differences between the different social groups, particularly when it came to age and relation to activity variables. In fact, the average values by age groups ranged between 0.2 for people over 65 years old and 3.6 for young people aged 15 to 24 and with a strong gradient as the age increased. The relation to activity posted minimum values for the people who did household work, together with retirees and pensioners (0.4) compared to the employed (2.1), the unemployed (2.2) and, above all, the students (3.6).

Contacts online and through virtual networks are directly related to the intensity of personal relations, ranging between 0.9 when they are low and 3.4 when they are high, as it is one of the channels through which they materialise. For less obvious reasons, they are also related to the participation in association, varying from 1.6 when it is low to 3.5 when it is high.

Social cohesion, safety and the (lack of) corruption are important dimensions of the social capital and special mention needs to be made in the Basque case of the strong feeling of safety that was close to 8 points on average. Social cohesion, combining proximity, disputes and acceptance of differences, was around 6 points. However, corruption was seen negatively, with 5.9 points which reflects the majority belief in the existence of abuse of power.

The three aspects reflected a significant social uniformity, even though some greater differences can be seen regarding safety, where real crimes and the fear of being a victim of them, along with the threat of job insecurity dominated, compared to illness, marriage break-ups and commercial aspects.

The remaining social capital indicators that are closest to safety are social cohesion - the greater the cohesion, the better the safety, ranging between 6.9 and 8 3.- and happiness and health - the happier you are, the safer you feel, ranging between 7.2 and 8.0-, even though it may be in an inverse causal sense.

N.B. Eustat worked closely with the BBVA Foundation and statistical institutes in other autonomous communities and Spain to conduct this social capital survey.

Eustat will present the operation during the VIII Basque Sociology Congress on 12 February.