The Basque Country exports its sustainable cities technology in Montevideo 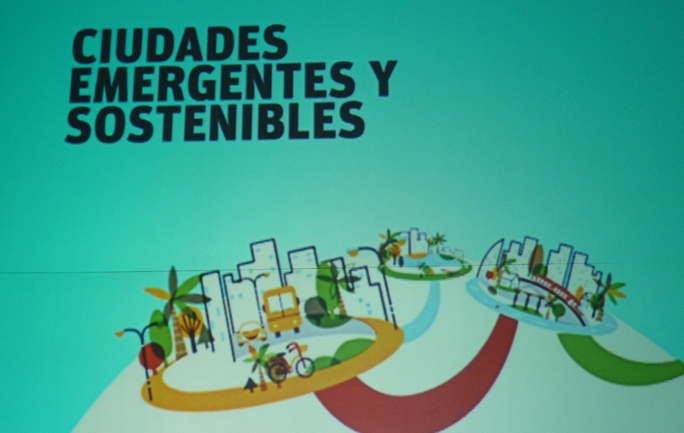 During the annual meeting if the IDB Assembly, held in Montevideo, a seminar was held on sustainable and emerging cities in Latin America and the Caribbean, which aimed to share experiences and reflect on the challenges facing the medium-sized cities of Latin America in the areas of urban, fiscal and environmental sustainability.

The Basque Institutions presented the success of the Basque Country in terms of industrial and urban regeneration and sustainable cities to 250 Latin-American mayors and authorities. Ibon ARESO, the deputy mayor of Bilbao City Council, showcased the transformation of this city, which has gone from being an industrial city with a strong metal-machining, iron and steel and ship-building industrial tradition, to becoming an international icon of a sustainable, innovative and modern city.

Tomas ORBEA, Director of the Basque Government's SPRI Group, also presented the URBE 2050 initiative, which aims to construct a private-public partnership platform among international and Basque companies and institutions in order to generate win-win alliances with local partners. This will help to develop sustainable cities in Latin America and the Caribbean, based on the experience and expertise of the Basque Country in the field of economic and urban transformation.

The SPRI seeks to position the institutional and business capacity of the Basque Country, developed through clusters, institutions and new forms of public-private partnership, in the development of sustainable cities. In fact, the participation in the international IBD event follows on from the Lehendakari's visit to the IDB in October 2011, and which opened up a window of opportunity in this world movement where the Basque Country must play an important role to drive the exports of our cutting-edge service companies, among other results.

During four days of intense activity, Tomás Orbea, SPRI director, Elvira Cortajarena, the Basque Country Delegate, Juan Sans and Juan Luis Moragues met with authorities from the cities involved in the sustainable development process, including Bucaramanga (Colombia), Santa Ana (El Salvador), Trujillo ( Peru), Goiana ( Brazil) and Montevideo (Uruguay), which open up new opportunities for our companies.. At the same time, a delegation of the environment cluster, ACLIMA, visited the Rio do Sul region and Uruguay, where it coincided with the delegation of the Basque Institutions.

Over the coming five years, the IDB will work with at least one city of the 26 LAC countries. The cities selected for 2012 are Bolivia, Nicaragua, Argentina and Jamaica.

Sustainable and emerging cities in Latin America and the Caribbean.

As the IDB President, Luis Alberto Moreno, announced during the "Sustainable and Emerging Cities Initiative: From Diagnostics to Action" seminar, at which the Basque delegation was a guest speaker, the IDB Sustainable and Emerging Cities Programme is an initiative launched in 2011 in order to support 140 cities with populations of between 100,000 and 2 million people in Latin America and the Caribbean, which are growing at a much quicker rate than the region's mega-cities. The initiative is specifically looking for partnerships with cities that want to develop a long-term strategy to attain urban, fiscal and environmental sustainability, and to anticipate the consequences of climate change.

During the pilot stage of the initiative, the IDB worked with the cities of Montevideo, Port of Spain (Trinidad and Tobago), Santa Ana (El Salvador), Trujillo (Peru), and Goiânia (Brazil). The Bank sent a team of sector experts to each city to conduct a rigorous and far-reaching diagnostics and to assess all the challenges affecting sustainability. The municipal authorities will then use this input to prioritise problems and design a plan of action to solve them. Finally, the IDB is helping to prepare investment projects and to obtain funding from international and national sources.

The Basque Country is emerging as one of the European companies that have built up an institutional and business structure that has led to the 3 Basque provincial capitals to receive international awards for their sustainable development and urban regeneration. Special mention should be made of Vitoria-Gasteiz being selected as the European Green Capital and Donostia-San Sebastián as Capital of Culture 2016.

Among its other prizes, Bilbao was named as the Lee Kuan Yew World City 2010, awarded by the Swedish Nobel Academy for its far-reaching urban transformation.
These initiatives are part of the Basque Government's strategy to export our capacities and technologies related to the sustainable and emerging cities, including governance, urban development, regeneration and waste management, and private-public coordination.