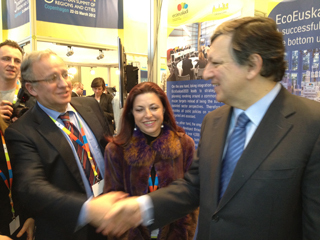 The President of the European Commission, Durão Barroso, visited the Basque Country stand at the Copenhagen Summit

Following on from the success of the previous summits at Amsterdam (1997), Wroclaw (2005), Rome (2007) and Prague (2009), the V European Summit of Regions and Cities organised by the Committee of the Regions in conjunction with the city of Copenhagen and the Capital-Region of Denmark, is tackling the urban issue and promoting it as a crucial dimension in the debate on the future of European Union policies. It is underpinned by the idea that an "urban fabric" has to take the capacity of the European cities and regions into account to re-invent themselves as places to live, that foster social, economic, cultural and intellectual exchanges by means of incorporating innovation in urban planning in architectural projects.

This Summit, which is being attended by political representatives of the different European regions and mayors from all Member States, is focusing on European cities as the means to drive sustainable development around the world. Entitled "The European Urban Fabric in the 21st Century", the V Summit will consider issues such as urban dynamics, European governance and the role of regions and cities in the measures to tackle climate change.

The organisation has selected a series of 28 projects to be showcased as examples of good practices in the thematic exhibition known as "Colourful Cities". The exhibition is divided into four groups: beautiful cities, focused on architecture and urban planning; green cities -including EcoEuskadi 2020- and which highlights energy efficiency, transport and smart development; smart cities, which includes protects based on smart and innovative projects, and inclusive cities, which features examples of benchmarks in inclusion, social innovation and employment.

The Basque Country is thus positioned among the leading European region, by means of a roadmap that is commitment to economic prosperity, equality and social cohesion, along with protecting the environment. The conceptual framework underpinning the process to construct the Strategy has been integration, both from the perspective of adapting to local, regional, international and state legislation, and in its compulsion to achieve the maximum participation of agents, stakeholders and the general public.