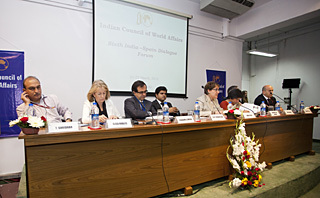 The Basque machine-tool sector foresees a "complicated year but with opportunities" on the US, China and Indian market

The Indian market is one of the most important "business opportunities" for the coming years and the machine-tool sector has used the trade mission led by the Lehendakari to increase their contacts with business organisations, distributors and end customers of these products. These contacts have led to at least 2 dozen Indian companies "with great purchasing clout" confirming that they will be present at the next Basque Biennial Machine-Tool Fair to be held at the BEC at the end of May. The General Manager of the Association of Machine-Tool Manufacturers (AFM), Xabier Ortueta, forecasts a "complicated year but with opportunities", in particular, abroad, which explains the importance of being present on the Indian market. "There is no question about the demand, but rather who is going to sell it," stressed Ortueta, who considers India to be "a really interesting country for the coming years" as "it still has to build everything as far as energy, infrastructures, railway and industry are concerned", sectors in which the Basque machine-tool sector in the world leader. The AFM exports products to the tune of 30 million euros a year (40 these years) to India. With the opening of the new Danobat plant in June, there will be 7 companies of the AFM in India which will end the year with a turnover over 1,100 million euros.

On the other hand, Tecnalia also assessed its presence in India, from where they have returned "surprised" by the amount of business opportunities that they have found. Leyre Madariaga, the Tecnalia Internationalisation Director, pointed out that internationalisation is a "strategic pillar" of the company and they have therefore used the Basque Government trade mission to begin to explore a market that was previously unknown and explain the Basque model to support innovation and technology. "It is important for us to be where the Basque companies are," explained Madariaga, whose hopes "to be a major presence" on the Indian market "in the medium or long term".

The Tecnalia Internationalisation Director, Leyre Madariaga, was entrusted with explaining everything about Tecnalia and its operations during the VI Spain-India Tribune that is currently being held in New Dehli.