Lehendakari: “The Basque Country has to become a small piece of this great country”

Embed video
Lehendakari: "The Basque Country has to become a small piece of this great country" Source: Irekia 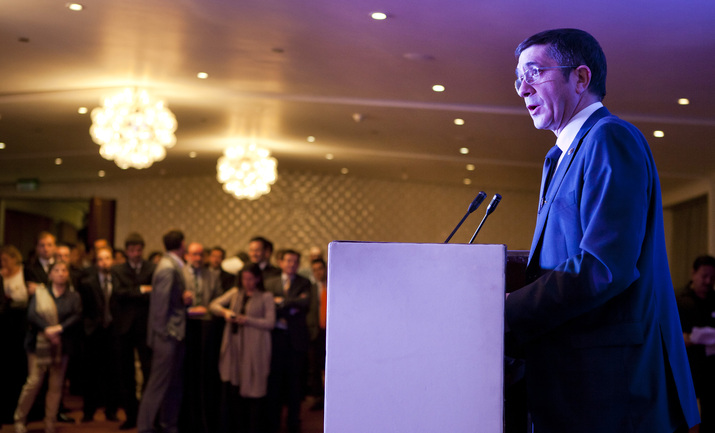 The Basque Premier, Patxi López, has ended his official visit to India with the "positive" feeling that the results from the trip should begin to be seen in the "mid-term". López stressed the leadership of the Basque Country in many of the areas of interest and business in which India is involved, such as automotive sector, renewable energies, urban development, transport or tourism. He called on the delegates at the official reception that he hosted this evening in Delhi (India) to be the "gateway" for the companies that want to turn their sights on India. The Lehendakari pointed out that ETA calling a halt to violence once and for all is a key factor in the future foreign development of the Basque Country. "And if we have managed to build the modern society that the Basque Country is today despite ETA, imagine what we will be able to do now!" he added.

The official reception is a ceremony that the Lehendakari hosts during all the trade missions abroad and is an opportunity for him to meet with the Basques resident, in this case, in New Delhi (India), companies and organisations that accompanied the Basque delegation during the trip that ended today. However, the Basque Government Minister for Industry, Bernabé Unda, will hold different meetings until next Friday.
Members of the business community on the trade mission (around one hundred), including José Mari Aldekoa (Mondragón), representatives of the Basque Chambers of Commerce, Nuria López de Gereñu, the Chair of Confebask, and entrepreneurs resident in Delhi were at the reception.

The Lehendakari, who will travel back to Euskadi tomorrow, stressed that he was leaving with a "positive" feeling about this mission and that he hoped it would "materialises into facts in the medium term". "India is a country with a huge potential and the Basque Country has to become a tiny part of this great country," he added.

In order to achieve this objective, the Basque delegation has spent a week travelling around India and showcase the country base on the competitiveness and innovation of the business sector, world leader in many spheres such as the automotive industry, sustainable development, renewable energies, transport, tourism or machine tools.

Yet this trip has also been an opportunity to confirm the "solidarity" spirit of Basque society during the visit to different projects funded in India thanks to the involvement of the Basque Agency for Development Cooperation in the Anantapur zone. "During this trip, I have had the opportunity to also meet those people that manage to turn the cold funds of cooperation into real people. Into people that can have sustainable market garden, raise cows, obtain energy thanks to biogas, work in a micro-company, have health care when pregnant, or attend primary schools thanks to our endeavours in the Basque Country and which continue here," he explained.

The Lehendakari pointed out that ETA once and for all calling a halt to violence is a key factor in the future foreign development of the Basque Country. "And if we have managed to build the modern society that the Basque Country is today despite ETA, imagine what we will be able to do now!" he added.