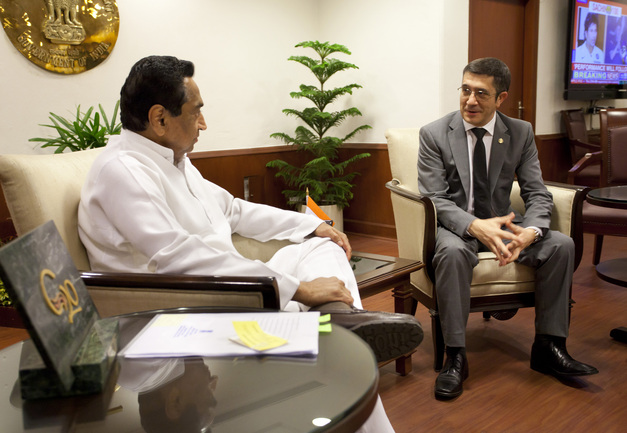 The Basque Government, in coordination with the Indian Ministry for Urban Development, will organise a working seminar aimed at searching for "points of interest" and "collaboration areas" among the companies of both regions in the field of sustainable urban development. India is running 3 programmes, with a budget of 35,000 million dollars, to improve its hygienic conditions, waste water treatment and management of urban solid waste. This is "an opportunity for our companies" to establish direct contacts with Indian companies in order to set up on the Indian market, specifically in a sector where the Basque Country is a benchmark. The Urbe 2050 is being showcased in Uruguay today, where the Government and 50 companies are focusing on putting forward solutions for the urban development of 160 of the most important cities of South America over the coming years.

The second day of the trade mission led by the Basque Premier, Lehendakari Patxi López, has pinpointed areas of interest in the sustainable urban development sector. Urban development, waste water treatment and urban solid waste management are clearly problems for India and that is where the Basque Country and its companies wish to play a key role.

After landing in New Delhi, the Lehendakari met with the Indian Minister for Urban Development, Kamal Nath. The Basque Premier outlined some examples of the progress that the Basque Country has achieved in recent decades - Vitoria, Green Capital of Europe, Bilbao and its urban transformation, and San Sebastian, European Capital of Culture 2016, and the Indian Minister asked the Lehendakari to organise a seminar between Indian and Basque companies to look for "collaboration areas". The seminar will be held in India "as the focus should be on companies making contacts here", as the Lehendakari pointed out and he calculated that the "business opportunity" that India has opened up in this area would be worth 35,000 million dollars over the coming years.

Specifically, India is implementing 3 strategic plans: the first, aimed at the country's 63 largest cities, another for smaller cities, and in third place, a programme for treating waste water, urban solid waste, etc.

The Lehendakari told the Minister about the progress being made by companies and Basque society itself. One example is the fact that very day the Urbe 2050 project was being showcased in Montenvideo (Uruguay). This initiative involves the Basque Government and 50 companies in different sustainable urban development projects on which 1660 of the most important cities of South America will embark in the coming years.

In fact, this initiative emerged during the last trade mission of the Lehendakari to the USA, where the idea was mooted after a meeting with the Ibero-American Development Bank. It also provides further proof that the trade missions of the Basque Country "are coming up with the goods".

The Lehendakari has invited the Minister for Urban Development to visit the Basque Country and to discover for himself how Basque companies work in this sector to see how it is possible to build "economic, ecological and socially sustainable" cities in the 21st century.