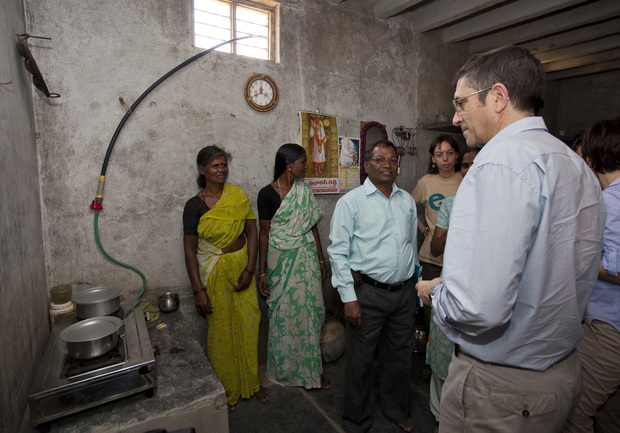 The second day of the mission led by the Basque Premier, Lehendakari Patxi López, to India ended the development-orientated part of the trip with a field trip to different projects in which the Basque Government is involved through the Vicente Ferrer Foundation. This visit has been an opportunity, as the Lehendakari stressed, to see that "these resources have effectively been put to the test and have created situations where they are now being used to improve the way of live of people who, until relatively recently, had absolutely nothing". López believes that it had been the right decision to label India as a "priority" country in terms of cooperation, something that he had seen for himself during this visit. He went on to stress that his Government would continue to support cooperation as it is the "expression of the solidarity of Basque society". "There are projects that are nearly a matter of life or death for some women and that we should keep that clearly in mind when we assess where we should make cuts. There are areas where we will not cut back as there are basic principles that we want to uphold," he stressed.

The Lehendakari, Patxi López, and the Basque delegation that is currently visiting India today concluded the first part of this mission dedicated to development cooperation. During this second day, the delegation visited different projects aimed at improving the quality of life and the economy of women and at improving water collection and conservation for agriculture.

The members of the delegation include the Lehendakari, the General Secretary for Foreign Affairs, Guillermo Echenique, the Director of the Basque Agency for Development Cooperation, Marta Ares, and representatives of the Vicente Ferrer Foundation, including the son of its founder, Moncho Ferrer.

In Gorantla, the delegation visited one of the mango plantations that was set up thanks to a project funded by the Basque Government through the Vicente Ferrer Foundation and which has benefitted 221 farming families in Anantapur. This is one of the driest areas of India, after the Rajasthán dessert, and which is currently suffering one of the most serious droughts in recent years.

This project has sought to encourage the diversification of the local crops, with the main one being peanuts, and this is being achieved by installing a drip irrigation system and water pumped powered by solar panels.

The project, which has different implementation stages, is based on five plantations. Five thousand mango trees have been planted in the one that the Lehendakari visited this Sunday and which are managed by 36 families. Five solar panels have been installed there and each of them serves seven farmers and cost 6,000 euros. The Basque Government has earmarked 386,170 euros to this project.

Improving the quality of life of women

In the morning, the Basque delegation visited Kothapallithanda, where an agro-ecological programme is being run with groups of women, some of whom are victims of domestic abuse. The Lehendakari discussed with them the project that they have created to set up a development fund so that women can apply for micro-credits to start their own businesses, including purchasing animals to fatten and then sell.

A second goal is to establish a support network among the women themselves. In Seekivaripalli, the Basque delegation also saw for itself the specifications of a housing colony, similar to another one backed in India by Visesa and its workers, in conjunction with the Basque Agency for Development Cooperation, who contributed 50,000 euros.

This type of initiative seeks to provide decent housing with adequate hygiene and basic living conditions for tribal groups, the disabled and victims of natural disasters. In the Anantapur district, 50,000 houses of this type are being built at the rate of 5,000 per year. There are 37 housing units, which are home to 63 families, in the colony visited by the Lehendakari.

The schedule also included the visit to a sustainable energy project and the biogas plants, involving women, who have been trained in breeding and looking after animals, as well as in the economic management of the business. When they have five animals, they can apply for a biogas plant to be built to install a two-ring cooker in their kitchen.

Thanks to this system, they no longer have to inhale smoke as they previously cooked using wood and fewer trees need to be felled. The two-ring biogas cooker needs 50 kilos of excrement and 50 litres of water a day and 750 grams of methane gas are produced every day, which is sufficient for a family of four or five members. The cost of each plant is 310 euros and 4,000 plants are set up in Anantapur. Four or five animals are needed to run each plant and means two less large trees are felled each year. The surplus is used as fertilizer.

This marks the end of the first part of the mission to India which will be focused on the business sector from tomorrow onwards. Nearly one hundred companies will join the mission from Monday, along with the Basque Government Minister for Industry, Innovation, Trade and Tourism, Bernabé Unda.