“En tierra de sueños” ("In a Dreamland"), prize winner at the Berlin tourism and film festival 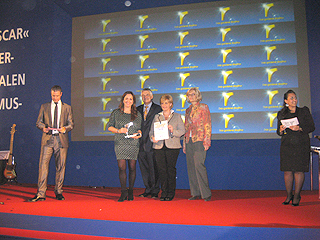 The 4D experiment, produced by the Villa Lucía Wine Thematic Centre, was a prize winner in the "Countries and Regions" category

‘En tierra de sueños', the 4D experiment where the Vinfos (wine elves) take the viewer on a magical trip through the Rioja Alavesa, was today awarded the ‘Das Goldene Stadttor' at the Berlin International Tourism and Film Festival held as part of the ITB -International Tourism Bourse- that is currently on in the German capital. The 4D experiment, produced by the Villa Lucía Wine Thematic Centre, was a prize winner in the "Countries and Regions" (Lander und Regionen) category

The Basque project took this award at the eleventh hosting of the prestigious German tourism-film festival, and which is also a member of the International Committee of Tourism Film Feastivals (CIFFT). The entries this year came from over 30 countries in a total of six categories. The international jury is made up of representatives of the German federation of film production associations, tourism experts, event organisers, actors, tourism marketing professionals and tourism managers. The prize-winning ceremony, held on Thursday 8 March 2012, was attended by representatives of the project team and Villa-Lucía, along with the Basque Government's General Director of Tourism, Isable Muela, and the Basquetour Director of Communications, Joseba Larrinaga.

The prize joins the long list of awards obtained in 2011, including ‘The Best of the Fest 3D Shorts' at the Hollywood 3D Film Festival; ‘Technology in the service of Art' at the Napa Valley Wine Country Film Festival; ‘Best 3D Film' and ‘Best Rural Tourism Film' at Art&Tur de Portugal; and the ‘Best Of' Wine Tourism from the Major Vineyards and Wine Capitals Network.