The Basque Government launches a stimulus package to fund business and kick-start the economy with a 2,180 euro injection this year 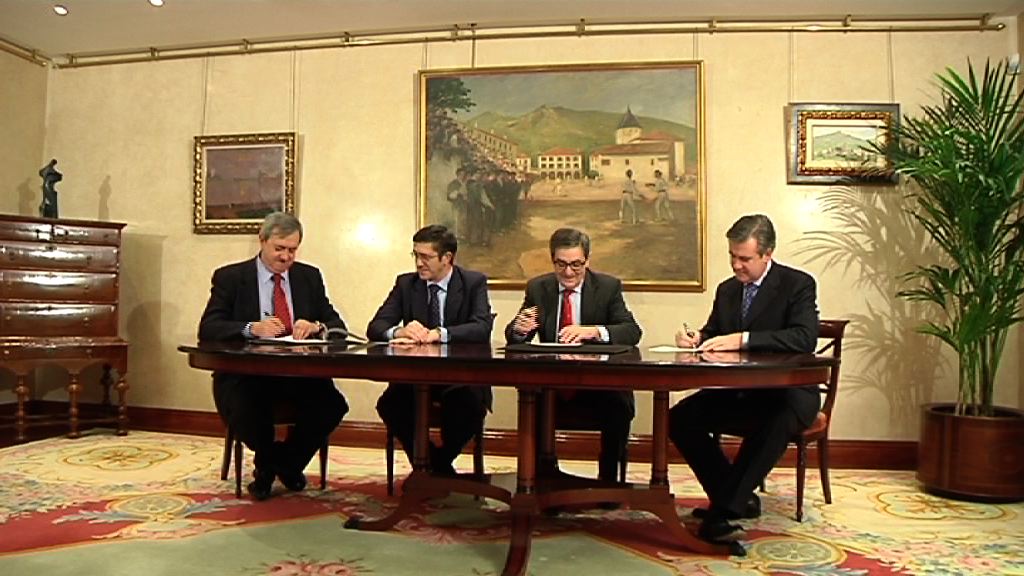 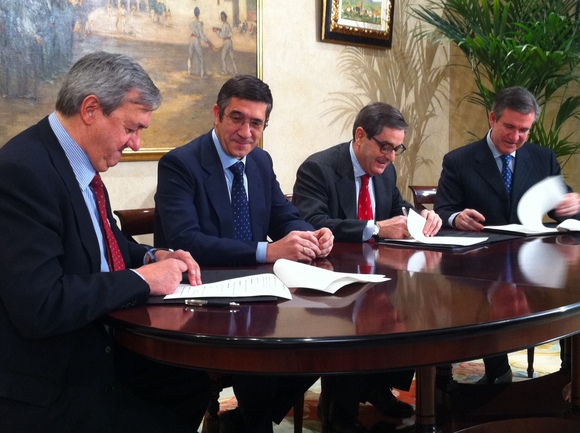 This new initiative announced by the Lehendakari will support and consolidate the production sector, thanks to its knock-on effect. It includes additional collateral for the Mutual Guarantee Societies, a new line of emergency collateral to be approved this year, a new agreement with financial institutions which Kutxabank has already signed, or the shoring up of the Ekarpen fund. The Basque Government has unveiled a stimulus package that will involve up to 2,180 million euros being injected to kick-start the economy and to find solutions for the funding problems facing the companies of the Basque Country.

Lehendakari Patxi López, the Basque Premier, today unveiled the initiative by the Basque Government Ministers for the Economy and Treasury, Carlos Aguirre, and for Industry, Innovation, Trade and Tourism, Bernabé Unda, along with the Kutxabank CEO, Mario Fernández. It is a financial support strategy for business that can be broken down into different areas.

The Basque Government believes that the current economic downturn is comparable to the intense industrial re-structuring in the 1980s and 1990s. It is therefore again necessary today to bring in emergency measures to kick start growth and economic activity again to buck the trend.

New support tools therefore need to be defined that allow companies to boost their globalisation and competitive transformation strategies, their investment plans in R&D&i, and their capacity to take on large orders and contracts to drive industrial activity and employment. Basque companies are being greatly hindered by one main obstacle: the very serious lack of funding.

The programme prepared by the Basque Government is in response to this problem. And the measures it includes will have a direct impact on business and, therefore, on generating and keeping jobs.

The initiative has taken some prior premises into account: respecting community directives and the 2012 budgetary availability of the Government. On the one hand, it is based on the industrial policy criteria of the European Government, specifically, on the Community provisions (Article 87 and 88 of the Treaty) regarding the granting of guarantees to companies, once the Temporary Framework ended in 2011.

On the other hand, it is underpinned by the provisions of Article 9 of the 2012 Budget, where the Government envisaged the following instruments:

-Up to 550 million euros for loans by the Mutual Guarantee Societies (MGS).
-Up to 400 million euros for any type of collateral operations.
- Other financial resources as part of the agreements with the CEB, European Investment Bank (EIB), European Investment Fund (EIF) and other institutions for business operations through Luzaro and other partner entities.

It is precisely the last point that allows the lines of collateral quantified in the Budget to be extended and leverage of the private-public resources to make more funding available to companies.

Furthermore, in addition to these actions, there is a partners' agreement to boost investments in strategic companies within Ekarpen, the investment company shared by the Government, Provincial Councils and Kutxabank.

The financial stimulus package for Basque Companies is thus structured as follows:

1.- Financial stimulus package for SMEs. It will mobilise a total of 1,310 million euros to make working capital, investments and capitalization of the partners more available. This programme is divided into the following instruments:

a) 550 million euros earmarked for loans through the Elkargi and Oinarri mutual guarantee societies (MGS).

b) Agreement with the partner financial entities for an amount of up to 600 million euros. The Government will provide share risk collateral (60% Basque Government and 40% financial institutions) of up to 400 million euros for participative loans and credits. Kutxabank has already signed up to this agreement, as its CEO, Mario Fernández, explained. And it is open to the participation of other financial institutions. The validation process with the European Commission is underway.

c) 50 million euro collateral for investments and refunding by Luzaro, which can mobilise up to 100 million).

2.- Seed project support programme. It will mobilise 470 million euros, with the following measures:

a) A new Emergency Collateral Decree will be passed this year, once it has been authorised by the European Commission, as it has been agreed with the Provincial Councils. The amount in question is 200 million euros.

b) Collateral for Ekarpen for strategic participative loans. This is worth 100 million euros. The validation process with the European Commission is underway.

c) Impetus for the Ekarpen agreement to trigger new stake-holding operation in major investment seed projects. The Administrations (Government and Provincial Councils) have agreed a capital increase to the tune of 20 million euros, along with a further 150 million from Kutxabank to fund new projects.

Apart from the aforementioned contributions, which total 1,780 million euros within this emergency programme, there is the 400 million loan that the European Investment Bank (EIB) has offered this year to fund the R&D&i Programme 2010-2014 of the Basque Government.

Therefore, this means a total package of 2,180 million euros will be available to Basque companies this year.

This Government programme is set in the context of the far-reaching economic crisis in Europe. The majority of EU economies virtually came to a halt in the second half of 2011, which has greatly weakened the business structure, which was badly hit after three years of resistance.

Spain's situation is particularly delicate due to EU demands regarding fiscal adjustments and budgetary cuts. Spain is likely to technically go into recession at the end of the first quarter , which could possibly affect the Basque Country as well.

While still complying with our fiscal undertakings, the Basque Government has decided that it must opt for driving and stimulating business. This has clear knock-on effects on the economy: for each euro that the Government allocates to technology programmes such as Etorgai, where there is more than one company and a technological centre or university, at least a further two euros are mobilised from the private sector. Business and employment are therefore generated.

The Government has thus acted knowing that it only has the resources that are in the budget, yet the Budget provides many stimulus possibilities that should not be overlooked to help employment and the economy. This involves helping the real economy, preventing a long recession and joining the growing economies.

Our Autonomous Community is currently the one with the lowest unemployment rate in Spain, despite having the highest average wage. Our current unemployment rate is half of the one during the previous economic crisis in the 1980s and 1990s, which indicates how today's production structure has adapted and approved.

Funding companies is essential for the Basque Country to uphold or improve its situation. However, the Government has set a further three priorities that are also directly linked to shoring up and strengthening the economy: globalisation, market-orientated innovation and entrepreneurship.

MEASURES TO STIMULATE THE BUSINESS AND FUNDING OF BASQUE COMPANIES