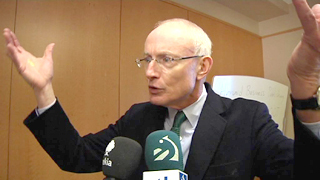 Harvard University recognized the example the Basque Country represents as a model of economic development. The Minister for Industry, Innovation, Trade and Tourism, Bernabé Unda, took part as a special guest in the course on Competitiveness held at the prestigious US university. Following his conference, the director of the course, Michael E. Porter, assessed the policies introduced over recent decades, and especially, during this legislature.

Harvard has been studying the 'Basque case' for years under the title 'The Basque Country: A Strategy for Economic Development. It is headed by Professor Porter, the chief expert in the world on this specialist subject, who is also considered the creator of the cluster model.

The lecture held last night was attended by a group of pupils selected from the Harvard Business School, the Harvard Kennedy School, the Massachussets Institute of Technology (MIT) and Tufts University.

The session started with a class given by Professor Michael Porter, who introduced the background to the 'Basque case'. This was followed by an analysis of the details of the policy, which for decades has enabled the Basque Country to be situated in a privileged position among European regions in terms of economic development.

The 'case' had been studied up to 2009. That year, according to Professor Porter in his presentation, "the socialist Patxi López succeeded Juan José Ibarretxe as President following the March elections". and he continued: "the Nationalist Party won the most votes, but without an absolute majority, so the Socialist Party formed a new Government for the first time since the return of democracy to Spain. The provincial governments (provincial councils) continued to be dominated by the PNV".

According to Porter's analysis, "Patxi López chose Bernabé Unda, a business executive without a political affiliation, as Minister for Industry. When Unda took up office in May 2009, economic activity was falling sharply under the influence of the global economic and financial crisis". and added: "Unda had to develop a new economic plan for the coming years".

Following this interpretation by the expert from Harvard, the Minister intervened to explain the steps taken since May 2009. Bernabé Unda explained the decisions taken to tackle the crisis situation which he faced on taking up office.

Key to the Resist Strategy

The Minister explained to the Harvard Business School some of the most important measures adopted since mid 2009. He described how the Resist Strategy (through which over 45,000 jobs have been consolidated) was applied in order to help Basque companies to overcome the crisis situation, as well as the tools developed to facilitate the financing of the business network of the Basque Country.

He reviewed how the use of venture capital has multiplied to support the  Basque business fabric: over a period of two and a half years we have doubled the amount invested in the previous 7 years.

Furthermore, the Ekarpen Fund was launched (with 100 million to date, with the addition of the same amount this year), shock guarantees have been created (with 267 million awarded to support projects in which 2,800 companies have participated with over 28,000 jobs).

The Minister gave a detailed description of the main axes of the Business Competitiveness Plan 2010-2013, approved by the Government in July 2010 and which serves as a guide for the competitive transformation of the Basque Country.

He referred to the commitment to internationalization, with the business missions, as well as the formation of qualified personnel through scholarships (there has been a leap from 30 scholarships at the start of the legislature to 500 that will be awarded this year).

The Minister highlighted aspects such as the recent record in exports, and also along the lines of the open economy, the success of tourism, which over these last two years has achieved consecutive records in visitor arrivals.

Unda recalled how the competitiveness policy has gone from committing to  innovation to adding RII&D (incorporating internationalization), as well as opportunities afforded by sustainability. In R&D, the Basque Country has surpasssed for the first time the barrier of 2% expenditure in relation to GDP.

The minister gave examples of concrete cases such as the commitment to the Lead strategy, with projects like the electric vehicle, intelligent networks or non-conventional gas.

Unda emphasized the investment made to strengthen clusters, and cooperation projects between companies.

In his conference at the University of Boston, Unda was accompanied by the Deputy Minsiter for Innovation and Technology, Juan Goicolea, and by the Director of Planning and Strategy, Inmaculada Freije. The class was also attended by José Luis Curbelo, Director of Orkestra- Basque Institute of Competitiveness.

They all defended, before the students of Harvard and the course director, the development which has occurred over the last few years that has enabled the Basque Country to be the Spanish autonomous community which is best resisting in the current economic context.

The 'Basque case', coming soon to the Basque Country

Harvard University has been studying and designing the 'Basque case' for some years. Soon it will be introduced in society at the 10th Edition of the MOC course (Microeconomics of Competitiveness), designed by the American University and imparted by the Basque Institute of Competitiveness, Orkestra.

Yesterday's conference represented continuity to the conference offered last Octuber by President Patxi López at Harvard, in which he explained some of the economic policies that are enabling the Basque Country to tackle the current economic crisis in better conditions than the surrounding  regions.