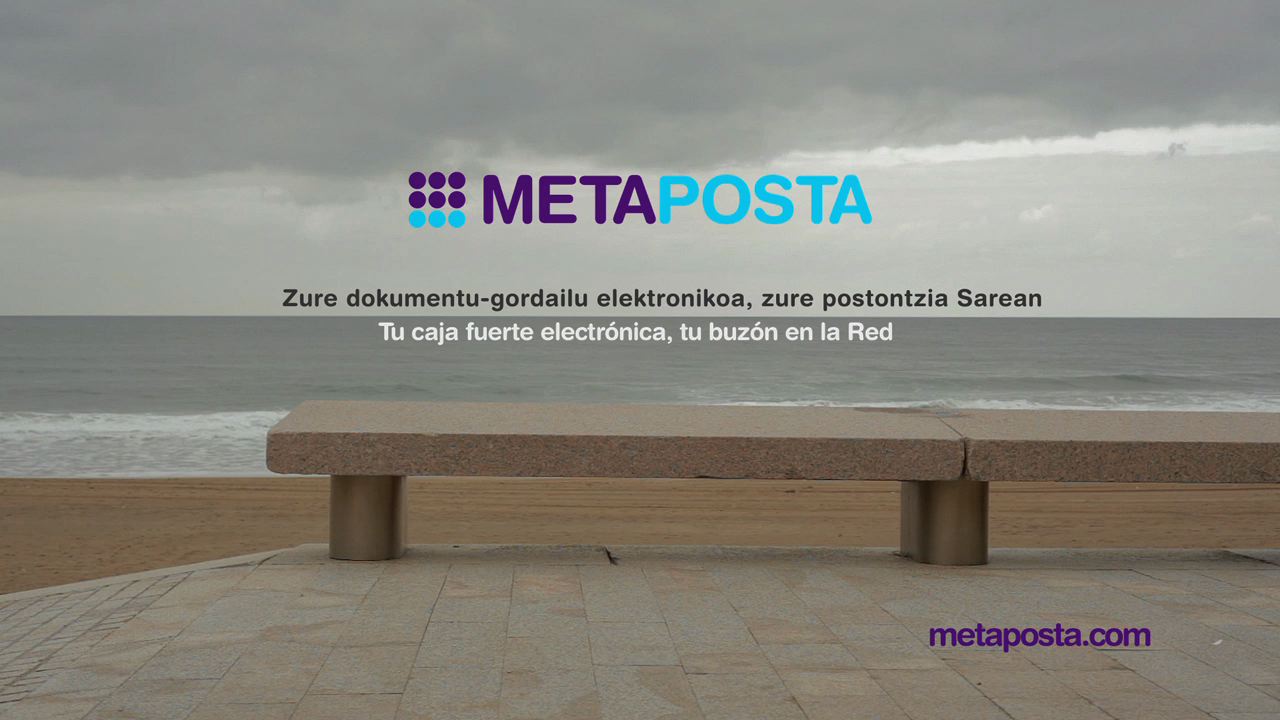 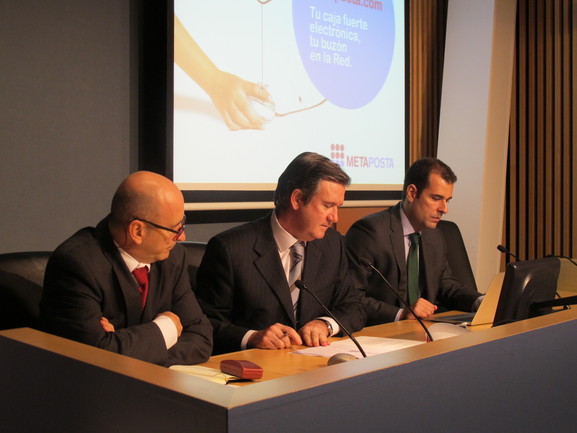 "Metaposta directly helps to enhance competitiveness, with benefits for the general public and for the authorities and companies," explained the Basque Government's Minister for Industry, Innovation, Trade and Tourism, Bernabé Unda, during the press conference to take stock of the first year. METAPOSTA is a project included in the Basque Digital Agenda, inspired by similar initiatives that are already operating successfully in countries such as Denmark. Its new features include a corporate application, one for mobile phones and e-notification.

Metaposta, the Internet electronic letterbox and strongbox service introduced by the Basque Government, is celebrating its first anniversary with over 12,000 users and 13 active dispatchers that have sent over 700,000 documents so far. "Metaposta directly enhances competitiveness, with benefits for the general public and for the authorities and companies," stressed the Basque Government Minister for Industry, Innovation, Trade and Tourism, Bernabé Unda, during the press conference to take stock of the first year of Metapost, when he was accompanied by the Metaposta CEO and the Basque Government Deputy Minister for Innovation and Technology, Juan Goicolea, and the Metaposta Director, Aitor Velasco.

This secure and confidential service is a ground-breaking initiative in online correspondence in the Basque Country and in the rest of Spain. Metaposta is a secure and confidential way to receive documents sent by financial institutions, telephone or electricity companies or the authorities. It can also be used to upload important digitalized documents in order to store them in a secure place and with the possibility to sign them electronically. One noteworthy fact is that Metaposta users have already uploaded a total of 20,000 documents to their letterboxes. Ten per cent of those documents were signed at Metaposta using the digital certificate. And many others were delivered to the strongbox with the electronic signature incorporated.

"The public-private partnership is essential for such an innovative and forward-looking service to be successful," stressed Unda. Metaposta is the outcome of the strategic alliance between the Basque Government and the main Basque financial entities, along with energy companies, telephone operators or water consortiums. Metaposta started operations in February 2011 with the BBK, Kutxa, Caja Vital, Caja Laboral, Ipar Kutxa and Bankoa using it to send out their correspondence. They would soon be joined by Seguros Lagun Aro, Euskaltel, Eroski Móvil and Iberdrola. The Bilbao Bizkaia Water Board, the Vitoria Water Board (Amvisa) or Servicios de Txingudi also use it to send out their invoices. Thus, 65% of Basque citizens already can receive 75% of their routine correspondence through Metaposta.

During its first year of operations, Metaposta was invited to the main Internet and technological forums in Spain, including Ficod 2011, SITIAslan 2011 (where it was awarded the prize for the best success story in the field of regional administration), the Digital Citizen Congress 2011 or the Euskal Encounter 2011. It was also a finalist for the Fundetec 2011 awards, considered to be the Technology Oscars in Spain, and it has just won the Dintel award for the best "cloud computing" project.

Gipuzkoa, the most connected

As the Metaposta Director, Aitor Velasco, pointed out, out of the 12,000 users that now use Metaposta, Gipuzkoa is the province where it is most established accounting for 38% of users, the same percentage as Bizkaia, even though the latter is the most populated, while 22% of the Metaposta registered users were in Álava. Metaposta also has hundred of users in the rest of Spain, particularly in Navarra, Barcelona and Madrid. The majority of the users are men (74%) and the most of them (80%) are between 25 and 60 years old.

For security reasons, the Metaposta registration process is rather complicated. There are currently three ways of registering: online banking, onsite (with a Metapost accredited person) and with a digital certificate. The registration process, which aims to create and maintain a secure and confidential system, is one of the reasons that financial institutions and service companies opt for Metaposta.

On the other hand, Metaposta has implemented over 70 developmental processes to improve its service during this first year of operations. Three are particularly noteworthy:

METAPOSTA has designed a SME Pack (http://www.metaposta.com/es/pack-pyme.html), a free tool that was implemented last October. This easy-to-install application is aimed at companies and other organisations (small local councils, associations) that send out documents and which (as they do not have the necessary human and technical resources) do not allow the entity that requires large METAPOSTA dispatchers to be integrated with METAPOSTA.

Developing the SME PACK (http://www.metaposta.com/es/pack-pyme.html) sought to and has managed to set up a common application for those potential dispatchers that enables them, without any developments being necessary, to send documents to METAPOSTA. Since its commercial launch, on 27 September 2011, it has in fact been a source of great interest in different areas: from the companies that were targeted to use the payroll and invoice dispatch centre, to the interest among documentary management companies that see it as an extra application for its programs, without forgetting any type of associations and medium-sized councils.

Metaposta has applications for iPhone and Android, released at the end of 2011, and further ones are being prepared for Blackberry and Java in 2012, which is a clear commitment to develop the Metaposta system so that the service can be consulted from an device with online access. The Metaposta apps have been downloaded over 1,500 times so far.

The latest deployment of the Metaposta system is being unveiled today, 23 February, and the most important and beneficial update for dispatchers and users, the e-notification, will get underway. This will enable institutions and companies to send online legal notifications to those users that so expressly desire it.

METAPOSTA provides individuals and companies with a guaranteed online secure and confidential space, with unlimited size and lifelong guarantee, where they can receive and store any type of documents.

Apart from its roles as an online electronic letterbox and strongbox, METAPOSYA is an alternative to avoid any dispersion when receiving document, as a secure and confidential system to access communications and documents sent by companies and public entities. Compared to email, it offers the advantage that the customer will only receive messages from previously authorised entities and there is therefore no likelihood of receiving spam or chain message from unknown senders.

Along with the advantages that the system offers individuals and companies, the initiative is part of the policy to develop Electronic Administration in the Basque Country, fostering the massive use of new cutting-edge digital services and fighting against discrimination of people who are not aware of the mechanisms of the new information technologies.

Its model is the successful Danish e-Boks service (www.e-boks.dk), which already has 3.5 million users in a country of 5.5 million inhabitants and 600 leading corporations sending their communications. Thus, with the introduction of METAPOSTA, the Basque Country is offering a similar proposal to initiatives by cutting-edge countries in the development of online services, such as eBoks (Denmark), De-Mail (Germany), MyPage.no (Norway), Agosp (Australia) or My eCitizen (Singapore).

METAPOSTA, a company incorporated in 2010, is made up of eight partners: Ezten (venture capital fund of the SPRI and the Basque Government through its Department for Industry, Innovation, Commerce and Tourism), EJIE (IT company of the Vitoria parliament, answering to the Department for Justice and Public Administration), the Bilbao, Gipuzkoa and Álava Chambers of Commerce, Corporación Tecnalia, Gupost, the direct marketing company and Mondragón Inversiones. The CEO of the company, Xabier Sabalza, is the Basque Government's Innovation and Information Society.

• Its adoption and use is voluntary and selective: each recipient may select from which dispatcher it will receive documentation.
• It is not an email account and thus avoids many of the security problems arising from traditional electronic mail, such as phishing (identity theft) or spam (unsolicited bulk email).
• Access is through a website that is accessible from anywhere, at any time and from any device with Internet connect.
• The e-documents may be from the messages sent or contributed by the users using the functions to upload and download materials to the electronic strongbox.
• The storage space for the user is unlimited, as is its duration. It is a lifelong service.
• User friendliness is the priority in its design.
• It is for all the citizens and all the companies of the Basque Country, with the possibility of extending it to other spheres.
• It is free for the end user and a low cost dispatches for dispatchers.

You can download from the following link a high quality mini-documentary recorded by the Eguradia presenter and Metaposta proscriber, Ana Urrutia, about her day-to-day experience with our services. The images can be used, provided that a reference is made to the owner of the video, Metaposta, S.A.