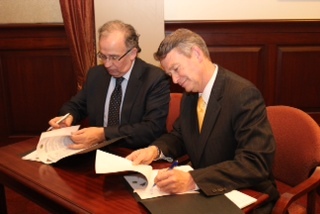 Following on from the setting up of the Euro-region, this is the second agreement to be signed with foreign regions

The Basque Government is seeking to set up a network of regions and states to serve as a platform for the interests of Basque companies. Guillermo Echenique, the Basque Government's General Secretary for Foreign Affairs, and the Lieutenant Governor of the State of Idaho, Brad Little, representing the Basque Premier and the State Governor respectively, signed the partnership agreement between the two regions in Boise, Idaho. As Guillermo Echenique explained, "this is the second agreement with other regions in our current term of office and follows on from the setting up of the Euro-region with Aquitaine":

The aim of this bilateral policy is for the Basque Government is to set up a network of regions and states to serve as a platform for the interests of Basque companies when branching out to different parts of the world.

The signed agreement envisages the setting up of a working group made up of companies from both territories. Its purpose is to provide the companies with backing as they expand and explore common interests in fields relating to renewable energies and new technologies, among others.

This agreement likewise considers the operating of a Basque business office in Boise and there will also be a similar facility representing Idaho in Bilbao.

It also stresses consolidating cultural relations, along with the establishing of new relations between universities from both territories.

"This government has embarked on a different stage in Basque foreign affairs. The core aspect of this agreement with Aquitaine and this agreement with Idaho, along with the one signed with the Inter-American Development Bank, are to promote Basque business and economic interests, which are interests that unite, and not others, that separate", stressed Echenique during his speech. "These agreements are underpinned by far-reaching political discussion regarding how to improve the Basque Country's position abroad. The dissemination of Basque artistic and cultural events, along with the construction of a network of Basque citizens abroad, plays a fundamental role in this task".

This agreement is the outcome of the first contacts made between the Basque Country and Idaho during Jaidldi, the Basque festival that is held in the capital of Idaho every 5 years and which attracts a large number of the Basques living abroad.
The General Secretary for Foreign Affairs ended his speech by pointing out that "the business potential of the State of Idaho, which is now home to many leading companies that were previously based in California, is mainly unknown in the Basque Country. Both the US authorities and the Basque Country have embarked on this ground-breaking initiative, which is greatly facilitated by the cultural and family ties existing between both territories".

The agreement was signed at the Boise capitol in the presence of members of the Basque community in the US west and of state authorities. These included Ben Ysursa, Idaho Secretary of State; Pete Cenarrusa, who held that post for over 47 years; Roy Eiguren, a well known lobbyist with Basque roots; Patty Miller, Executive Director of the Boise Basque Museum; David Lachiondo and John Bieter, Director and Deputy Director, respectively, of the Basque Studies Program at Boise State University.