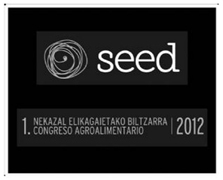 The Lehendakari called for "countrywide backing" for foreign business expansion during the opening of the congress for the agri-food sector, which accounts for over 6.5% of the Basque industrial GDP and employees over 15,500 people.

The I Agri-food Congress is a "milestone that consolidates the Basque Country as an international benchmark for gastronomy and agri-food products". The event has brought together leading international and national experts in order to offer the sector know-how, ideas and strategic tools and optimistically tackle a future under the shadow of the crisis, changes in markets and consumer habits, and sustainability; in short, to set out the path for business success.

Vitoria-Gasteiz is hosting the I Agri-Food Congress 2012 that seeks to be a meeting point for international and national experts to lay down the strategic lines for the sector in the context of the economic crisis. The challenges being discussed in the congress include the need for globalisation, in this sector as well, in order to position Basque companies competitively in the international markets.

The Lehendakari, Patxi López, presided the opening of the Congress, accompanied by the Basque Government Minister for the Environment, Land Planning, Agriculture and Fisheries, Pilar Unzalu, along with representatives from Álava institutions. During his speech, the Lehendakari stressed that the key to expanding abroad to compete with the rest of the world market requires the "support of everyone and countrywide backing". As he pointed out, "the strength of a country brand will be beneficial for Basque products with quality and excellence as their hallmark". The current economic crisis means that "new ideas and new strategies are required more than ever in order to be more competitive and to transmit the necessary confidence in a sector with a more than positive value chain," explained López. He then added that the new ideas and proposals would help the business strategies to "succeed today and progress tomorrow".

Minister Pilar Unzalu confirmed that in the Basque Country "we have a modern and increasingly more innovative industry and we know that it is fundamental that it continues to be so". Her Department therefore prioritises support for R&D&i "as a key element to generate know-how and employment in this sector".

In the Basque Country, the Food and Drink industry represents over 6.5% of the Basque industrial GDP with nearly 2,300 companies that in turn account for 6.5% of the companies in the sector in Spain. The agri-food industry, which posts sales of nearly 3,700 million euros, employs over 15,500 people.