IBILEK, backed by the Basque Government and REPSOL, offers 14 electric cars to rent by the hour in Bilbao and Barakaldo 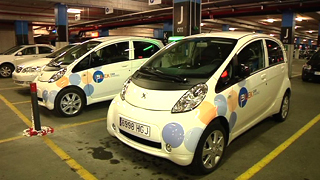 The Basque Government Minister for Industry, Trade and Tourism, Bernabé Unda, presided the opening of the first electric vehicle control centre in Spain, which will allow Ibil to monitor its charging network in real time as part of its ambitious expansion plan.

"You are pure innovation," the Minister told the Ibil team, which was set up in 2010 by the Basque Government through the Basque Energy Board (EVE) and Repsol, at the opening of the first centre of this type in mainland Spain and one of the first in Europe. Thanks to the new facility, located in the BEC Tower in Barakaldo (Bizkaia), the company will be able to "provide its customers with a better quality and safer service", as its managers stressed. All the charging stations installed by Ibil for the public service and for private individual or companies are controlled from here, along with the vehicles of its car-sharing affiliate (the electric car leasing system has been operational since January), Ibilek, and will display the renewable electricity buying terms.

Apart from visiting the new control centre, the delegates had the opportunity to see the electric models that are currently being marketed by the aforementioned brands and which were on show next to the Ibil offices. The Control Centre has two operator stations, two support stations and a crisis room, along with a "video wall" designed for information to be easily shared between the operators and the team, and to display maps, images, graphs and data with really high graphic quality.

The systems controls the two main Ibil business units, the charging infrastructure and the car-sharing system run by Ibilek, its affiliate.

With regard to the former, the system allows the users access to the location maps, to monitor the status of each charging station, access to diagrams of the terminals of each location (in augmented reality) and to intervene directly at the terminals if any incident occurs or when so requested by a customer. The management system logs all the operations at each terminal and provides users with a list of their consumption and the relevant billing.

The customers can connect to the system via Internet or mobile phone and access their user zone for information on their charges, and even to book public charging stations in advance.

With regard to the electric car-sharing service provided by Ibilek, the management system can display the location and status of the bases, along with the position of each vehicle, the charge status of its battery and the bookings by the customers. Certain procedures with the vehicles can be carried out from the control centre, such as opening or closing the doors or authorise the use by customers.
In both cases, alerts can be received as a preliminary and fundamental process to solve problems and/or incidents. There is also access from the centre to information on purchasing with renewable electricity (with graphs and prices).

Ibil, which is 50% owned by the Basque Government through the Basque Energy Board and Respol, aims to install a electric vehicle charging network in Spain that is sufficient to ensure electric mobility.

In 2011, Ibil completed the installation of over 109 charging stations, which greatly exceeded the forecasts for that year. The objective for 2012 is to expand its business throughout Spain, by opening delegations in different autonomous communities.

Ibilke car-sharing is a new mobility concept, which is different from traditional car rentals. It offers a real alternative to the private car by means of leasing vehicles powered by electricity. The service is up and running in Bilbao and Barakaldo with a fleet of 14 new vehicles, made up of electric vehicles and pluggable hybrids, which will increase in number as the new Ibilek bases come into service.

Ibilek plans to expand this service in the three Basque provincial capitals and will thus facilitate global electric mobility throughout the Basque Country this year.