The participation process in the new Irekia is now underway 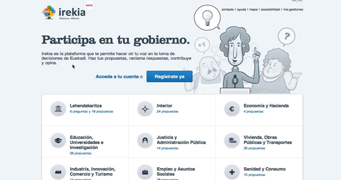 Irekia, the Open Government portal of the Basque Government, has started a participation process to get closer to the citizens and learn about their needs. For two years now, the Basque Country has had an Internet tool to listen and cater to the citizens. Given the greater social pressure for citizen participation, Irekia now wants the Basque people to have a bespoke website, where they can easily and directly take part in the decisions of the government. The videos on this page contain explanations about our beta version on which we are working so you can analyse, assess, give your input and suggest improvements. At the end of the page, you can leave your input in the comments section.

This news item contains two tutorials that provide an overview of the tool on which Irekia is working, which is still in beta version, which can be accessed by the citizens. After reviewing the available material, they can send us their opinion, criticisms and suggestions in the comments box. The contributions from the citizens will be collected, analysed and the website will then be adapted to take into account the ones that are closest to the Open Government goals: transparency, participation and collaboration. The citizens will have a month to discuss and put forward their suggestions for the new portal. At the same time, Lehendakari Patxi López, the Basque Premier, today met with around a hundred Internet experts to unveil the beta version of the future Irekia. The experts have been invited to try it out and then submit their feedback.

In the words of Nagore de los Ríos, the Director of Open Government and Internet Communication, "if this is a space for citizens to connect with politicians, if the tool is for them, we must have their input". The new Irekia version allows "us to be fully involved in the participation". In the beta version that is at the test stage, when the citizen has a specific need that the Basque Government can meet, "she or he just has to enter in Irekia and put their question or proposal", and can even contact the elected representative that is directly responsible in that area, whether it is a Basque Government Minister, Deputy Minister, or the Lehendakari himself. Therefore, in the new Irekia, each of the departments and people at the top of them can be contacted to answer the queries of and listen to the suggestions of the citizens. To ensure an efficient process, the citizen can see the response times for each petition. (Further information is available from the two tutorials).

If the first year was the one of preaching within the Basque Government on the cultural change that this new tool means, the second year has been the year of international recognition of the work of Irekia. The government of the Republic of Argentina was thus the first to use the Irekia software (open to all the administrations who wish to reuse and adapt it), with a pilot project in Berisso. In October, the Secretary General of the Organisation of American States (OEA) asked the Lehendakari to expand the Irekia software to the 44 member countries. October was also the month when Irekia joined the W3C, which meant that the Basque Country can now express its opinion about and vote on international decisions regarding Internet.

In figures, during its first two years, Irekia has served over 2 million pages, with 4,263 news items and 2,248 agenda events. With respect to the presence in social networks, it has 3,114 followers on Twitter and has been included in 281 lists by the people that make up that social network, whether there is constant chatter. On Facebook, Irekia has 2,179 "fans" and reaches 707,719 users. One of the main new features in 2011, the Basque Government's Social Networks Style and Usage Guide, was downloaded 8643 times.