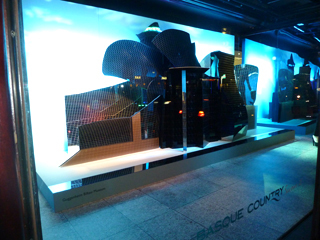 The official opening will take place at 6 p.m. this evening and will be attended by the Basque Government's General Director for Tourism, Isabel Muela, and the Director of the Spanish Tourist Office in London, Enrique Ruiz de Lera. The Basque Government's Ministry for Industry, Innovation, Trade and Tourism, through Basquetour (the Basque Tourist Agency) and in conjunction with Turespaña, will be promoting the Basque Country as a tourist destination at the famous Harrods department store in London.

This is the second consecutive year that this promotional campaign is being run at one of the most popular spots in London with visitors. Unlike last year when Andalusia was also present, this year the spotlight will solely be on the Basque Country. Two large window displays at the department store are thus inspired by the state-of-the-art architecture in the Basque Country: one of them features a reproduction of the Guggenheim Museum Bilbao made out of coloured glasses and the other window display is the setting for the original model of the Marqués de Riscal winery.

Once inside Harrods, the visitors will find different photo displays of the three Basque provinces. During the opening ceremony this evening, around a hundred subscribers of the English edition of Conde Nast Traveller, a magazine that published an issue dedicated to the Basque Country a few months ago, will enjoy a tasting session of Rioja Alavesa wines.

Along with the aforementioned actions, all the Harrods till receipts this month will feature the Basque Country logo and anyone making a purchase will be entered into a draw for a trip for two people to the Basque Country. Over eight million people are expected to visit this department store in January.

It is clearly an excellent opportunity to further consolidate the Basque Country as a tourist destination in Britain, the second outbound travel country and one of our main priority markets. In 2011 and pending the December figures, over 68,000 British tourists visited the Basque Country, which meant over 125,000 overnight stays in Basque hotels.