Cruces, the first Basque hospital with a fleet of electric vehicles 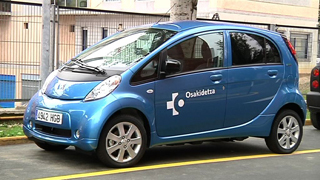 Six cars will be used to attend home hospitalization patients and to deliver medicine.

The new latest-generation fleet comprises 4 Peugeot Ion, one Mercedes E-Cell van and a Think, all of which run on electricity alone. The Cruces Hospital is a pioneer in implementing an electric vehicle fleet for its services and in applying a comprehensive fuel efficiency, energy saving policy.

This morning the Vice-Minister for Industry and Energy, Xabier Garmendia, the Vice-Minister for Quality, Research and Innovation in Health Services, Olga Isabel Rivera, the general manager of IBIL, Enrique Monasterio and the managing director of the Cruces Hospital, Gregorio Atxutegi presented the fleet of electric vehicles for the Cruces Hospital and the recharging facilities set up by IBIL. This is the first Basque hospital to have a fleet of electric vehicles with state-of-the-art technology, demonstrating that sustainable electric transport is also feasible for other public agencies and private companies.Cruces is a benchmark in the Basque Health System in terms of medical care and assistance and a pioneer in enhancing energy policies.

The hospital has introduced improvements aimed at attaining a highly energy-efficient transport fleet, in addition to the work plan put in place in collaboration with the Basque Energy Agency (a part of the regional ministry for Industry, Innovation, Trade and Tourism) to audit its energy consumption and implement energy saving improvements throughout the hospital complex.

The hospital has installed six electric vehicle charging points to service its six-vehicle fleet in collaboration with IBIL, a company set up by the Basque government (via the Basque Energy Agency EVE) and Repsol with a 50% stake each to manage the charging of electric vehicles. The new fleet will be used to provide the homecare health service and medicine delivery.

The electric vehicles replace the conventional fleet that ran on diesel and petrol. The new fleet comprises four Peugeot Ion, and a Mercedes E-cell van made at the plant in Vitoria-Gasteiz, thanks to an agreement between the Daimler Group and the Basque government to manufacture the model in the province of Alava. The homecare health service also includes a Ford Think vehicle leant by the EVE.

The new IBIL charging points service the entire fleet and boast the technology to identify the vehicles' drivers and prevent use by non-authorised personnel. They are also connected to the IBIL main office to monitor vehicle use and trigger an immediate response to any incident alerts entering the system.

The Cruces Hospital's commitment to replace vehicles run on fuel with a fleet of electric vehicles is part of the directors' policy to lower the hospital's overall energy consumption.

In 2010, the hospital signed an agreement with the Basque Energy Agency to conduct a study on the building's energy consumption, energy bills and energy loss with the aim of detecting opportunities for saving energy and using cleaner, renewable sources. In line with that policy, replacing the old fleets with highly efficient, state-of-the-art electric vehicles will help to lower the emissions caused by the homecare health service and make noise emissions practically non-existent, to the benefit of the patients.

Repsol and the Basque Energy Agency (EVE), a part Basque government's regional ministry for Industry, Innovation, Trade and Tourism, created the IBIL company in October 2010, with a 50% stake each, to design, build and operate a network of comprehensive electric mobility services in the Basque Country and to set up a network of charging points with the aim of having 85 points in operation by the end of 2011. The goal had already been attained by November.

IBIL aims to become a benchmark in electric vehicle charging technology in Spain. Thanks to Repsol and EVE's commitment to new energy technologies, IBIL has become a pioneering project that aims to see electric vehicles revolutionize the transport industry in coming years. To that end, they are offering companies specific plans and monthly flat rates to recharge their vehicles.