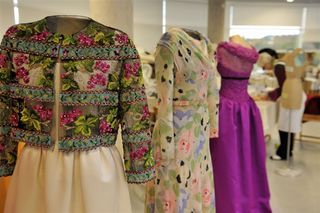 The exhibition, housed in the BilbaoCentro installations in Indautxu, is open to the public throughout the entire Christmas period.

The Vice-Minister for Trade and Tourism, Pilar Zorilla, and the Director of Tourism, Isabel Muela, accompanied by the designers, inaugurated the exhibition.

BilbaoCentro has inaugurated the "Euskadi Sabe a Moda" exhibition, which entails the work of 12 Basque designers paying homage to the master designer Cristóbal Balenciaga. The Vice-Minister for Trade and Tourism, Pilar Zorilla, and the Director of Tourism, Isabel Muela, inaugurated the exhibition accompanied by the participating designers, who include Ion Fiz, Alicia Rueda, Mercedes de Miguel, Ian Mosh and Miriam Ocariz. Felix Usunaga and Jorge Aio, the president and manager of the Bilbao Centro, respectively, were also present.

The Basque Country has always been a region noted for its talent and creativity, and Basque fashion is one of the ways in which these qualities manifest themselves. As Cristóbal Balenciaga was responsible for placing the region under the international spotlight in the fashion world and for giving it a global profile, this exhibition was organised both to pay homage to the master designer and to show off the Basque Country's multitude of tourist attractions.

Visitors to the exhibition will see how the creations on display are inspired by the Basque Country and, most importantly, respect the values espoused by Balenciaga. The shape of their designs hint at some of the region's unique features, such as Bilbao's characteristic flagstones, the waves of the Basque coast and the colours of the Rioja Alavesa.

The Basque Ministry of Industry, Innovation, Trade and Tourism has financed and promoted this initiative to draw attention to the quality of the Basque fashion industry. The Basque Country is a land of creators, and projects such as this, which combines a presentation of the region as a tourist destination with an exhibition of the capabilities of its fashion designers, serve to attract and develop new Basque talent.

This collection features the 8 models that were presented in Munich and Frankfurt in June of this year and has incorporated 4 new designs to reach a total of 12. In October, the exhibition accompanied the business mission to the United States, headed by the Lehendakari. The new exhibition site represents the beginning of an itinerary that will run over the course of the next few months, the next location being the Palacio de Igartza in Beasain. The Basque Government's objective is to take advantage of the region's varied attractions and make trade and tourism a driving force of the Basque economy with international scope, as set out in the 2010-2013 Competitiveness Plan.

Furthermore, the BilbaoCentro has decided to host this exhibition to strengthen the quality of the commercial sector and promote the creative capacity of Basque designers during the Christmas period, when commercial activity reaches a peak.

Inauguration of the Biok shop

In addition to the exhibition featuring the work of the 12 designers, the Association has implemented another business initiative, set in motion by BilbaoCentro and Lantegi Batuak, with the collaboration of the City Hall of Bilbao. The initiative entails the design, manufacture and marketing of clothing and household accessories, guided by ecological values. These complements are promoted by taking advantage of the publicity afforded by events such as the Fant and BBK Live festivals. In this manner, actions are undertaken in diverse social spheres, from integration into the workplace of individuals with intellectual disabilities to the reuse of resources. It is a fair and sustainable business, two concepts that should always be borne in mind, particularly during the Christmas period when there is higher consumer activity.

Biok opens its doors with a special collection for Christmas. It is a limited edition collection featuring purses, wallets, handbags and aprons, ranging in price between 10 and 40 euros. "Forming a part of Green Culture is very easy."