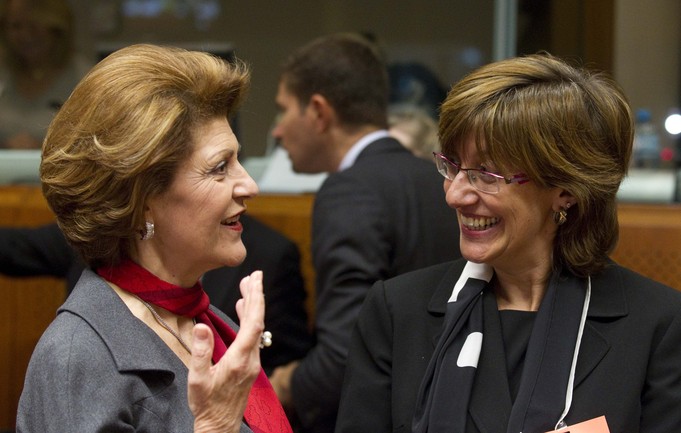 The Minister has also maintained a meeting with the Minister for Culture and with the Commissioner for Education, Culture, Multilingualism and Youth

Representing the Autonomous Regions, the Basque Government's Minister for Culture, Blanca Urgell, has intervened in the first Council of Ministers of the EU open to regional participation in the field of sport

The Basque Government's Minister for Culture, Blanca Urgell, intervened in the subject of sport within the Education, Youth, Culture and Sport Council of the European Union, celebrated in Brussels. Representing the Autonomous Regions, to which the possibility of participation was afforded for the first time, the Basque Minister intervened in the Basque language before the Ministers for Sport of the 27 EU Member States to clarify the position of the Autonomous Regions, defending good governance within sports.

Accompanying the Minister, the Basque delegation in the Council was composed of the Basque Government's Director for Sports, Patxi Mutiloa, the Basque Delegate to the EU, Marta Marín, and technical personnel.

The representative of the Basque executive intervened to present the position of the Autonomous Regions and ensure their participation in the Council, the highest decision-making body within the European Union. The intervention of the Minister represents the 10th participation of the Basque Country in Councils open to the Autonomous regions since 2005. The task of coordinating to reach a joint position was carried out in collaboration with the Basque Government's Directorate for Sports and the General Secretariat for Overseas Action, along with its Delegation to the EU.

During her intervention in the Basque language, the Minister defended the social and human dimension of sports, calling for "good management based on the fundamental values of sports in order to ensure that sporting activities are democratic, ethical, efficient and responsible".

She also vindicated the role of the EU, in collaboration with the regions, in initiatives to support the sports movement in the implementation of good governance practices focused on the prevention, control and sanctioning of acts that contravene good management.

The Minister has also maintained a meeting with the Minister for Culture and with the Commissioner or Education, Culture, Multilingualism and Youth, Androulla Vassiliou. The meeting took place in the Council of the EU and the representative of the Basque executive addressed current issues relating to the Culture Policy of the EU and invited the Commissioner to visit the Basque Country in the first quarter of 2012 in order to become acquainted with various initiatives relating to the competencies of her Ministry.

10th participation of the Basque Country in EU Councils

The intervention of the Basque Government's Minister for Culture proved possible as a result of the agreements of the Conference for European Community Affairs (CARCE) of December 9th, 2004 concerning the participation of regions in the working groups of the Council and the system of regional representation in the Formations of the Council of the European Union (Official State Gazette 16/03/2005). Within this framework and following the decision of the sectoral Conference on Sports celebrated on the 20th of October 2011, the Basque Country has intervened in the first EU Council on Sports open to the Autonomous Regions.

This is the tenth occasion on which a Basque Minister attends meetings of the Council of the EU, in accordance with the system of participation and representation of Autonomous Regions in the Council of the European Union, and the fourth occasion on which intervention has taken place in the Basque language within this institution, the result of the possibilities that have gradually been afforded in relation to the use of Basque within the European Union.

The system of regional participation and representation within the Council affords the Autonomous Regions the opportunity to assert their interests and influence the process of negotiation with the Council, having previously adopted the corresponding joint position in relation to the subject matter in question. The task of coordinating to achieve a joint position, in terms of the Basque language, involves the participation of all implicated Ministries and the General Secretariat for Overseas Action along with its Delegation to the EU.

Currently, five EU Councils of Ministers are open to the participation of the Autonomous Regions: Employment, Social Policy, Health and Consumer Affairs; Agriculture and Fisheries; Environment; Education, Youth, Culture and Sport and the area of gambling and betting within the Council for Competitiveness.