The Basque Country’s second day at Fitur focused on activities related to nature, greenways, promotion in Japan and taking up the baton as the community responsible for the “Green Spain” brand

Embed video
Download mp4 video set (zip)
The Basque Country’s second day at Fitur focused on activities related to nature, greenways, promotion in Japan and taking up the baton as the community responsible for the “Green Spain” brand Source: Irekia 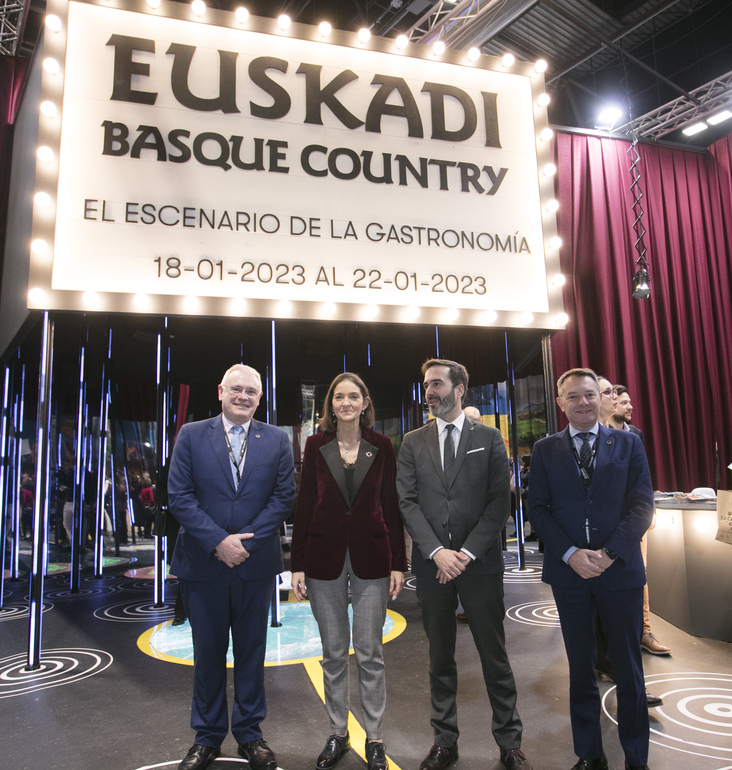 On this second professional day at Fitur, the Basque Country’s stand featured presentations from the municipalities and counties that wanted to bring a sample of their tourism offer. Their work and efforts have been and continue to be fundamental in the recovery of the sector.

In addition, the Basque Country has received the award for Best Supramunicipal Public Administration in the application of SICTED quality systems from the Secretary of State for Tourism. This is the result of the work carried out by the sector and the Basque Country’s public administrations in favour of quality, sustainability and competitiveness in our sector, a task that has been reflected in this edition of Fitur 2023.

The presentations of counties and towns began with the tourism potential of Enkarterri (Las Encartaciones), which is strongly committed to sustainable tourism, routes and walks. Barakaldo has unveiled the project “Following iron footsteps” [“Tras las huellas del hierro”], an industrial tourism product in the town to get to know in depth the before and after of the left bank. Under the project “Getxo, a plan every day” [“Getxo, cada día un plan”], the City Council of the coastal town is offering a wide range of experiences and plans that can be enjoyed by the sea throughout this new year. The main sites of Lekeitio’s tourist proposal at Fitur include the Santa Katalina lighthouse, Nuestra Señora de la Antigua, the Mendieta shipyard, Ogeia beach and Garraitz island.

A fusion between the tradition of txakoli and Basque comics was also featured at the Euskadi stand at the International Tourism Fair (Fitur). This morning, the innovative Txakomic project was presented, which for the first time fuses txakoli and comics.

For his part, the Minister for Tourism, Trade and Consumer Affairs welcomed the Japanese Ambassador to Spain, Takahiro Nakamae. The Minister explained the Basque Country’s programme of activities for the promotion of this Destination. There is an ambitious programme for 2023 that will culminate with the BASQUE WEEK in Tokyo. The Department of Tourism, Trade and Consumer Affairs will organise press trips to the Basque Country so that Japanese journalists specialising in tourism can get to know our country at first hand. These trips are scheduled to take place in spring and will focus on the most attractive sporting events in Japan, such as football and tennis, in order to specialise the dissemination of information to attract demand in addition to other traditional travel interests to our destination, such as historical monuments and gastronomy.

For their part, the Gipuzkoan towns of Irun and Hondarribia have presented at the Fitur International Tourism Fair their proposal to promote business tourism in Bidasoa-Txingudi, through the MICE guide, which brings together the attractions of the counties for this type of tourism from the Bidasoa Activa development agency. The Mayor of Irun, José Antonio Santano, and the Councillor for Tourism of the City Council of Hondarribia and Vice-President of Bidasoa activa, María Serrano, presented this Thursday the aforementioned MICE guide, which brings together the attractions of our counties for business tourism and in which the Ficoba exhibition centre stands out with “its powerful programme of trade fairs and congresses and through which 142,000 people passed in 2022”.

For the sixth consecutive year, Vitoria and Álava have presented their new ambassadors. Their function is to carry the name of the territory and the capital of Alava by flag during the year that their tenure lasts. They have always been linked to the audiovisual world of the media, cinema or series and many of them are active participants every year at the FESTVAL. Names such as Matías Prats, María Escario, Alberto Chicote and Roberto Brasero have held this position in previous editions. This year it is the turn of journalists Vicente Vallés and Cristina Villanueva along with actor Antonio Pagudo, who will be the ambassadors of Vitoria and Álava in 2023.

The Basque Country has taken over the coordination of the Green Spain tourism brand. In the symbolic act of handing over the baton, the Basque Government’s Minister for Tourism, Trade and Consumer Affairs, Javier Hurtado, pointed out that it is essential for the Basque Country to weave alliances like the one we have in Green Spain. This year the 4 Communities that make up Green Spain —the Basque Country, Cantabria, Asturias and Galicia— will promote the “Green Spain Ecotourism Corridor”, which will be the first major Ecotourism route in Spain. The project is financed with Next Generation funds through the Experiences Tourism Spain Plan.

The Provincial Council of Alava has presented the resource called the “Robleda de los Sueños”, the only visitable forest in the country that unifies the work of 25 painters on the bark of its oak trees. “La Robleda de los Sueños” is a unique open-air museum in which 25 artists of national and international renown have participated. Each artist has painted the trunk of an oak tree on which they have been able to express their art with the design, style and motifs of their choice.

The ABAO has presented its stable opera season, of recognised prestige, both nationally and internationally, and with an undeniable tourist attraction as it has an audience of around 70,000 spectators. And, also in Bilbao, the Bilbao Fashion City festival was presented, promoted by the Bilbao Centro association with the collaboration of the Basque Government’s Department of Tourism, Trade and Consumer Affairs, which brings together fashion, commerce and the attraction of an event.

Finally, the Basque Country stand was the setting for the presentation of new promotional materials that highlight the value of the Plazaola Greenway. The Basque Government’s Minister for Tourism, Trade and Consumer Affairs, Javier Hurtado, together with the Minister for Economic and Business Development, Mikel Irujo, presented various actions that combine new technologies with the digitalisation of the route for online platforms and a guide that shows the most interesting tourist resources close to the route.