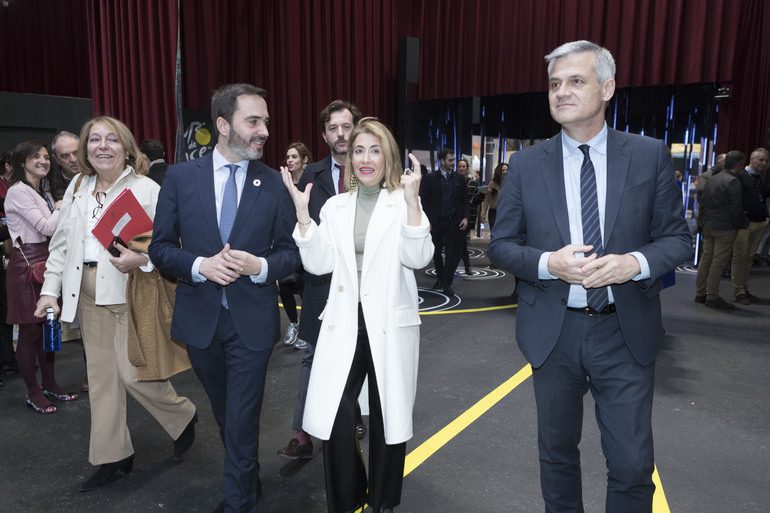 The Basque Country’s stand at Fitur was inaugurated today in an exhibition setting that represents the great stage of gastronomy. At the fair, the most important in the annual programme, an offer was presented based on this theme, one of the great tourist strengths and the main reason for visitors to come to the territory.

The Basque Government set up its stand so that the professional public could be aware of the great variety of the Basque Country’s offer with presentations of the three territories and the three capitals and with a special place for the start of the Tour de France, which will be a great calling card for the Basque Country to the world.

It is worth highlighting the offer of the three Basque capitals, today Bilbao-Bizkaia have presented their tourist offer as a destination related to events along with the activities related to the estuary and film shoots. Vitoria-Gasteiz and Alava unveiled the potential of the “Green Card” tourist loyalty card, which will offer visitors to the region discounts and incentives on accommodation, restaurants, guided tours, museums, wineries, activities and other experiences. The Donostia San Sebastian Premium product was also presented. It is a commitment to tourism with high added value, based on quality, authenticity and experience. Special emphasis was also placed on the promotion of the counties. Specifically, the Urdaibai tourist viewer was presented, a digital generator of tailor-made experiences, and the Industrial Tourism offer was presented in the “iron footprints” of Barakaldo. Also today, for the first time, three counties received recognition as Smart Tourist Destinations (DTIs). These are the counties of Uribe, Goierri and Rioja Alavesa. Initially, the DTI programme was conceived for municipalities and the Basque Country began by coordinating the projects of the 3 Basque capitals. But Destino Euskadi wanted to go a step further and worked together with Segittur to extend the Smart Tourism Destination methodology to the counties; a project that could serve as a roadmap for other regions and territories that wish to embark on this path and share the Basque Country’s experience.

The day ended with the presentation of the events for the centenary of Eduardo Chillida’s birth. An agenda that starts next April that will bring the work of the Basque sculptor to different countries on the occasion of his anniversary.

The last event of the afternoon was the presentation of tourist promotional materials related to the start of the Tour de France. The Tour has its own space on the stand and today the information that will be offered to visitors who come to the stages in the Basque Country was presented. This was accompanied by details of the plan underway for the development and deployment of cycle tourism in the Basque Country. Basquetour has developed a work plan for the coming months based on the definition of a range of routes for road cycling, the conversion of “The Basque Route”, a touring product, into a road cycling route, the organisation of the 3rd greenways conference to be held in Vitoria-Gasteiz on 8 February, the organisation of the 2nd Basque Country cycle tourism forum in May and the promotion and marketing of road cycle tourism routes and the Basque Country’s greenways (Arditurri and Montes del Hierro), as well as the creation of cultural cycle tourism routes such as the one related to the Romanesque in Alava. This whole plan is intertwined with a shared task with the cycling ecosystem in the Basque Country and with key agents and endorsers in the sector.