The Environmental Impact Statement for the Labraza wind farm is ready, and the one for Azaceta is imminent

Embed video
Download mp4 video set (zip)
The Environmental Impact Statement for the Labraza wind farm is ready, and the one for Azaceta is imminent Source: Irekia 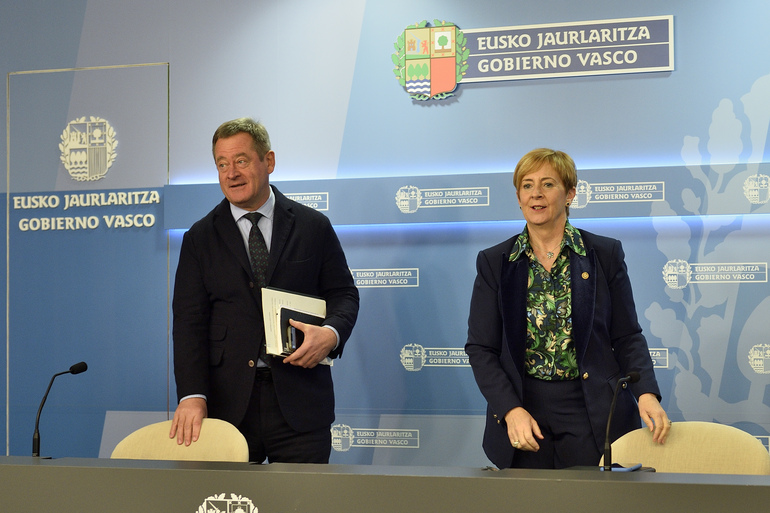 The spokesperson for the Basque Government and Minister for Culture and Language Policy, Bingen Zupiria, appeared at the usual press conference after the Governing Council, together with the Minister for Economic Development, Sustainability and the Environment, Arantxa Tapia, who reported on the progress made in the processing of wind power projects.

The Minister for Economic Development, Sustainability and the Environment, Arantxa Tapia, announced that the Environmental Impact Statement for the Labraza wind farm is ready, and the one for Azaceta is imminent. “This step represents a significant step forward in the processing of these infrastructures, which could in the future become the fourth and fifth wind farms in the Basque Country. There is no doubt that this is a particularly important milestone in the Basque Country’s energy policy, and although we still have some time to activate wind power generation, it is an important step forward, said Tapia.

The Labraza wind farm, located in the municipality of Oion, Álava, is set to have 8 wind turbines and a generating capacity of 40 MW. It is being promoted by Aixeindar. As it is a project that affects two different communities, the Basque Country and Navarre, it has required ministerial processing, which has been concluded favourably. The Azaceta wind farm, with 8 generators and a generating capacity of 40 MW, is located in the municipalities of Alegría-Dulantzi, Iruraiz Gauna, San Millán/Donemiliaga, Arraia Maeztu and Bernedo. Álava. It is being promoted by Aixeindar.

At present, according to Minister Tapia, the Basque Country generates 10% of the energy it consumes and the aim is to reach 15% by 2030, using renewable sources.  “We are aware that we will not be able to be totally self-sufficient in this respect, but we have a duty and responsibility to make a greater effort to increase the generation of clean energy.  We are working on it, although we are still far from the ratios we would like,” he said.

The minister for Economic Development, Sustainability and the Environment has stressed the future need for other types of renewable energies, and to this end, progress is being made in the preparation of a Territorial RENEWABLE ENERGY Sector Plan. This Territorial Renewable Energy Sector Plan is fundamentally an instrument for planning the territory of the Basque Country, taking into account other values worthy of protection such as environmental and cultural values.

AGREEMENTS OF THE GOVERNING COUNCIL

As usual, the spokesperson, Bingen Zupiria, provided information on other agreements of the Governing Council, including the following:

On the one hand, the Governing Council has approved the call, for the financial year 2023, of the Aid Programme for the design of Cross-cutting Collaborative Research and Development Projects, within the framework of the Basque Country 2030 Science, Technology and Innovation Plan. According to the spokesman, a total of 1.2 million euros will be allocated to finance this aid from the Lehendakaritza Innovation Fund, and the projects must be included in these three sections: Healthy Ageing, Electric Mobility and Circular Economy.

In addition, the Government has approved eight emergency plans for companies located in Bizkaia and Araba, civil protection plans to provide the best response to possible accidents that may have an effect outside the plant itself. These include: BAHÍA DE BIZKAIA GAS, WEYLCHEM BILBAO and ESERGUI (all three in Zierbena), DEKITRA and GENERAL QUÍMICA (both in Lantarón), MAXAM OUTDOORS (Galdakao), ACEROS INOXIDABLES OLARRA (Loiu) and REPSOL BUTANO (Santurtzi).

The Governing Council has also authorised today that Lanbide could have 565 million euros at its disposal for 2023in order to guarantee the income of those entitled to receive the Income Guarantee Grant, the Supplementary Housing Benefit and the Minimum Living Income, which are the set of benefits provided by Lanbide at a one-stop shop. According to Zupiria, this amount is 20% more than in 2022 for the same concepts and this is due to several reasons: despite the fact that the improvement in employment is also reflected in a lower number of RGI holders (the lowest figure since Lanbide took over this function), since January an increase of 8.5% has been applied, and since April, with the entry into force of the law passed in December, some allowances have been improved, which is why this amount, 565 million, is necessary to make the aid payments, which are monthly.

The Governing Council has also approved today an allocation of almost 5 million euros to promote the activities to be carried out by the third sector in the field of social intervention in 2023. The aim is to finance activities carried out by third sector entities in relation to the promotion and protection of personal autonomy and community integration of all people, actions that are framed within the field of social inclusion, family protection and care and protection of children and adolescents. Likewise, they are aimed at the integration of immigrants, and in general, interculturality, care and protection for the elderly, dependent and disabled people.