Embed video
Download mp4 video set (zip)
The Basque Country inaugurates its Fitur stand after a year in which it has been the leading region in tourism recovery Source: Irekia 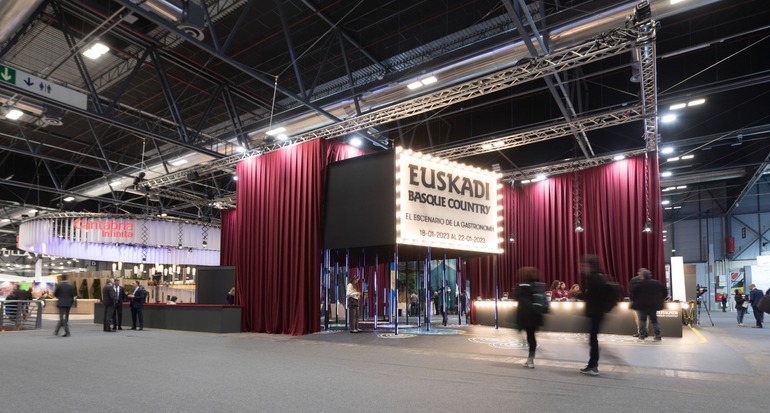 The Basque Country stand is, once again this year, the destination’s showcase at Fitur with a varied offer in a venue that has been transformed into a theatrical stage to prominently display its gastronomy, major international events such as Le Tour’s Le Gran Départ and the latest news from the territories and counties.

The Minister for Tourism, Trade and Consumer Affairs, Javier Hurtado, stressed that the Basque Country is a leading region in terms of tourism, which “is the result of the work and effort of all of us who make up the Basque tourism sector”. The Minister explained that official data show that “in 2022, the Basque Country was the leader among the Autonomous Communities in terms of tourism recovery compared to 2019, before COVID. From January to November 2022, we have not only recovered the number of visitors we had before the pandemic, but after two tough years, we have grown by more than 10% compared to 2019. And in terms of international tourism, which fell by more than 34% in the summer of 2021, we have increased its presence by 11.8%. These are very good figures which, as I say, should give us satisfaction for the work we have done, and energy to continue strengthening our strategy of sustainability and continue to promote a model of quality that has brought us this far.”

The minister stressed the importance of tourism, which has become a fundamental driving force and growth engine for the Basque economy. The Basque Country’s presence at Fitur demonstrates its model based on a seasonally adjusted offer, with movement of flows, with a diversified offer and which also provides benefits for local development throughout the territory. This commitment, driven by the Basque Government’s Tourism Strategy, has forged a firm leadership in sustainability, as demonstrated by the Basque Country Tourism Code of Ethics endorsed by the World Tourism Organization, to which more than 530 companies have already adhered, and which will exceed 600 by 2023. It is also reflected in its leading position in competitiveness, thanks to the Smart Tourism Destination (DTI) programmes in which the Basque Country has been the first region, under the auspices of the Secretary of State for Tourism, to implement DTIs not only in municipalities, as was the case until now, but also in counties. Furthermore, the Basque Country is a leader in quality with a SICTED Award for best Supramunicipal Public Administration at this edition of Fitur.

Lastly, the Minister highlighted the Basque Country’s leading position in the management of European Tourism Funds. The Basque Country was the first Autonomous Community to sign the agreements and transfer the funds to the executing entities in the Tourism Sustainability Plans at the destination. In 2021 and 2022, the Basque Country has received more than 60 million euros in direct investments for the management of projects in municipalities and counties, which seek to boost the modernisation and transformation of the tourism sector. And it has been the Autonomous Community with the largest allocation of funds in the National Plan for Enogastronomy.

The Basque Country’s stand at Fitur is called “the gastronomy stage” as it shows, in the form of a great theatre, one of its main strengths: an internationally recognised gastronomy that is at the heart of its varied offer. With this cover letter, the challenge for 2023 is to definitively recover the long-distance markets, giving priority to the departure of the Tour de France from the Basque Country. The event will be one of the Basque Country's most important international calling cards. The Basque Country is also committed to redoubling its efforts in international promotion. Actions in countries such as Japan are particularly noteworthy, where the Minister Javier Hurtado recently took up the baton to hold the next edition of the World Gastronomic Tourism Forum in Donostia.