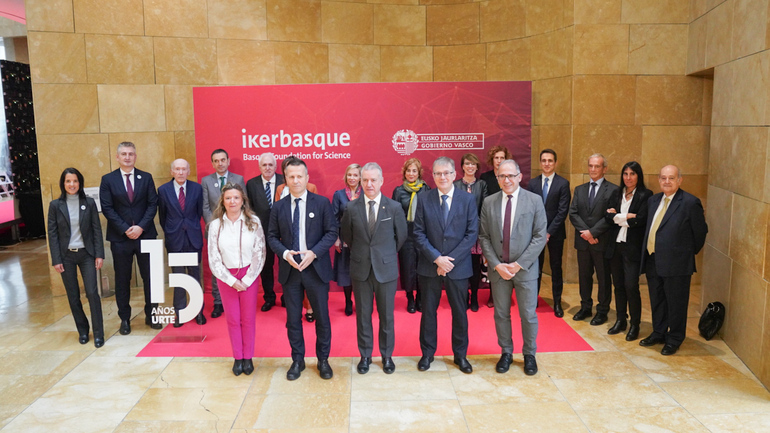 At midday this afternoon, the Lehendakari presided over the ceremony to celebrate the 15th anniversary of Ikerbasque, which took stock of the magnificent results obtained over the years and welcomed the new recruits: a group of 33 researchers from all fields of knowledge who will be working in the Basque Country’s universities and research centres in the coming years. The event was held at the Guggenheim Museum in Bilbao and was also attended by the Regional Minister of Education, Jokin Bildarratz; the Regional Minister of Health, Gotzone Sagardui; the Commissioner for Science, Technology and Innovation, Cristina Uriarte; the Scientific Director of Ikerbasque, Fernando Cossío; the Rector of the UPV/EHU, Eva Ferreira; the Rector of the University of Deusto, Jose Maria Guibert; the Rector of the University of Mondragón, Vixente Atxa; and representatives of the Basque Government and the science system.

In his speech, the Lehendakari said that he shared Ikerbasque’s “ambition and vision” to position the Basque Country as a “European scientific hub”, while assuring that the Government will continue to attract, repatriate and retain researchers as a fundamental asset for the promotion of science in the Basque Country. “We have a firm commitment. Our goal is to achieve convergence with the European average by 2023 and I am fully convinced that we are going to achieve it,” he said.

Ikerbasque, the Basque Foundation for Science, was set up in 2007 by the Basque Government’s Department of Education with the aim of strengthening the scientific research that has been carried out for years by the administrations, universities and companies in the autonomous region. During these 15 years, Ikerbasque has been committed to research talent as the cornerstone of science policy, attracting researchers from all over the world, including those who at some point in their careers left the Basque Country and offering opportunities to consolidate their careers to people who were already working in centres in the Basque Country.

The organisation currently has a total of 336 research staff from 35 countries in three categories: 175 consolidated, 91 young researchers and 70 Research Associates; a category that complements the two previous ones and aims to cover the different stages of the research career.

In addition, during these years Ikerbasque has collaborated with the Basque Government in launching the BERC (Basque Excellence Research Centers) programme, thanks to which six research centres have been created (Achucarro Basque Center for Neuroscience, BCBL, BCAM, BC3, Polymat and the Basque Center for Materials, Applications and Nanostructures) and another three have been consolidated (DIPC, Materials Physics Centre and Biophysics Unit). All of them carry out research in areas of knowledge that are considered strategic for the country.

Throughout its history, IKERBASQUE has been selected up to 5 times as one of the best European initiatives for scientific development, receiving 24 million euros from the European Commission to promote its talent attraction programmes.

The research staff recruited by IKERBASQUE all over the world to carry out their work in universities and R&D centres in the Basque Country has managed to bring a total of 295 million euros to the Basque Country since 2007 and 1,300 people work in the groups led by these people.

This has enabled Ikerbasque researchers to publish more than 10,000 articles in internationally prestigious scientific journals sharing the results of their research projects. Since 2007 they have created 31 spin-off companies and have obtained 34 ERC (European Research Council) grants, one of the most prestigious research grants in the world.

These data demonstrate the profitability of the commitment to scientific research. Ikerbasque also demonstrates once again that, in addition to the long-term benefits in terms of competitiveness and improving a country’s standard of living, investment in research can also yield immediate returns in the form of research funding.