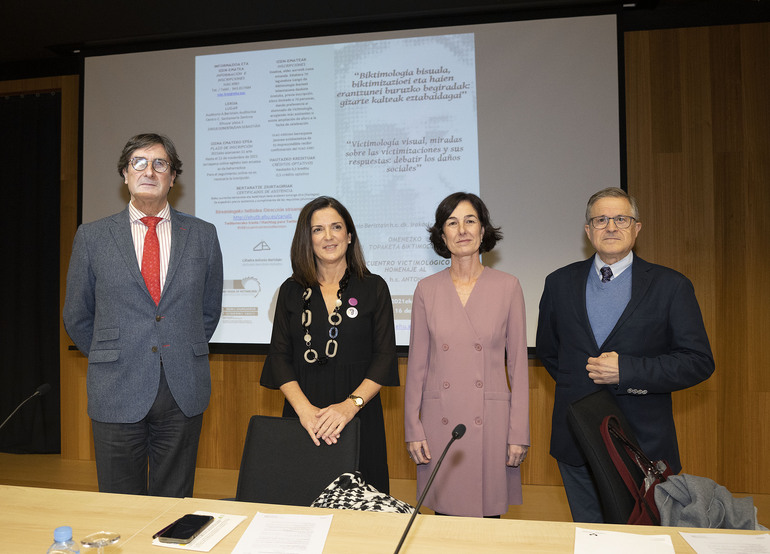 The Minister of Equality, Justice and Social Policies of the Basque Government, Mrs Beatriz Artolazabal, considers that "the assumption of prison powers opens the way for new forms of collaboration in criminological investigation". To this end, she has allocated a new budget item to applied research at the Basque Institute of Criminology-IVAC/KREI in the penitentiary field.

"Laying the foundations of the Basque prison model is not a flash in the pan, but rather hard work that requires the patience and perseverance of those of us who sow hoping to reap future fruits" Sailburu (Sailburu: *Minister, original basque language) Artolazabal commented. It was at the opening of the 2022/2023 Academic Year of the Basque Institute of Criminology of the University of the Basque Country this afternoon on the EHU UPV/Donostia-San Sebastian Campus.

At the meeting, the "III Francisco Javier Gómez Elosegi Prize" awarded to the Bidesari association and Mrs Isabel Germán, academic secretary of the IVAC-KREI, presented the report of the past academic year. Mrs Reyes Goenaga, Presiding Magistrate of the Provincial Court of Bizkaia (*Biscay), has been named an Honorary Member of the IVAC-KREI and, in addition, has given the inaugural lecture on the topic "Victims and criminal justice systems: expectations and reality", presented by Ignacio Subijana, President of the Superior Court of Justice of the Basque Country.

The "XVI Jean Pinatel Prize" has been -ex aequo- for the works entitled "Biziarteko Espetxe-Zigor Berrikusgarria: Zigorgarritasunaren gorakada Azken hamarkadetan" by Mrs Mikele Lapeira, graduated in Criminology from the EHU-UPV, and "The invisibility of gypsy women victims of gender violence” by Mr Omar Abdedaim Herrera, master's degree in Criminal Justice System from the University of Lleida.

Before the closing of the event, in charge of the secretary of the Campus of the EHU-UPV, Mrs. Idoia Otaegi, the diplomas handed out to the students who have passed the postgraduate course "Working with victims of traumatic experiences online", in the 2021-2022 academic last year.