The Basque Government promotes the "HaurEkin" network of municipalities, for the participation of children and adolescents in local life 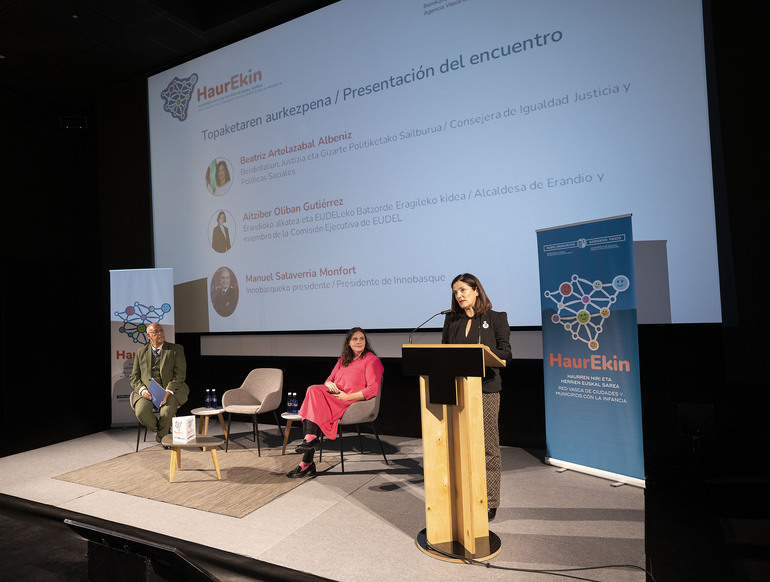 The Basque Government, through the Department of Equality, Justice and Social Policies of the Basque Government, will promote the HaurEkin Sarea network of municipalities for the participation of children and adolescents in local life. The network, created by Innobasque and now managed by the Directorate for Family and Childhood, currently has 16 municipalities in the Autonomous Community: Amorebieta-Etxano, Arrasate, Bakio, Balmaseda, Bilbao, Derio, Durango, Erandio, Ermua, Galdakao, Gatika, Larrabetzu, Leioa, Sopuerta, Tolosa and Zumaia

There are 16 municipalities, of 251 Basque councils, totalling nearly 770,000 inhabitants: almost a third of the population of Euskadi. In the Autonomous Community, there are 302,000 minors between the ages of 0 and 14, representing 14% of the population. HaurEkin is a project that is committed to incorporating the vision of boys and girls into local politics.

According to Mrs. Beatriz Artolazabal, Minister of Equality, Justice and Social Policies of the Basque Government, “the HauEkin proposal aims to transform our relations, resources and common spaces, restoring conditions of trust and autonomy, participation and health in our towns and cities. Girls and boys are the present and constitute the immediate future of our society and our Country. HaurEkin opens its doors to all Basque municipalities that wish to take these new and great social steps”.

“With today's event we´re starting a drive for the HaurEkin network in order to promote participation at the local level. Our idea is to create a network at the local level, dedicated to minors and to serve as the basis for the creation of the Forum for the Participation of Children and Adolescents in the Basque Country, as included in the bill that is now being finalized", he indicated. Minister Beatriz Artolazabal at the opening of the Conference.

"Our work –Mrs. Beatriz Artolazabal insisted- is focused on technical advice to municipalities for the implementation of participation processes with children and adolescents, as well as the promotion of work groups and training initiatives. We will organize regular coordination sessions and exchanges of experiences, congresses and conferences to share good practices”.