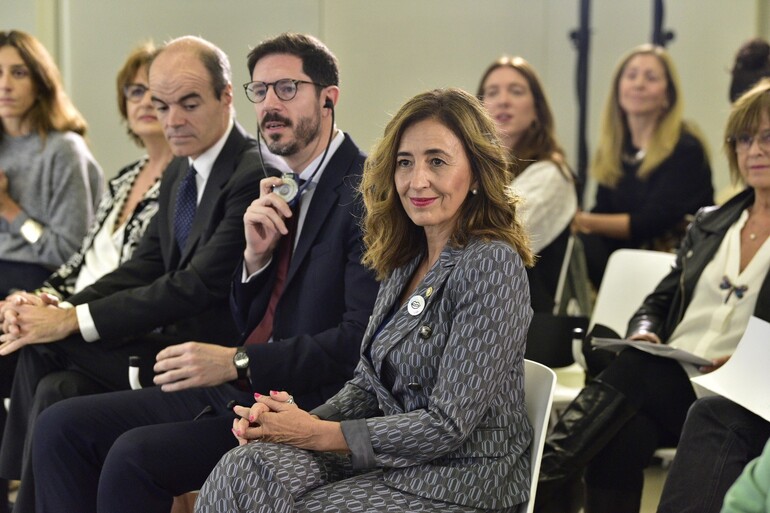 The Minister for Public Governance and Self-Government highlighted the Basque model of open government promoted in recent years by the Basque Government and other public administrations in the Basque Country. After pointing out that in the Basque Country a differentiated multilevel governance model is being built with its own model of relations between public administrations, Olatz Garamendi has committed to continue “bringing the administrations closer to the citizens, and the citizens closer to the administrations.” She also argued that decision-making in public policy-making should be “inclusive” in two ways, because “coordination between levels of government is just as important as their interaction with citizens, who are the ultimate recipients of public action.”

Garamendi explained that the Basque institutions involved in this project “are co-creating to build tools and actions that are necessary and of interest to the administrations and also to citizens, with a shared vision, building our own open model.” The Minister made these statements during her speech at the opening of the Open Forum of the Open Government Partnership, OGP the Basque Country, which met today in Bilbao and in which those responsible for this area in the City Council of Donostia, the Provincial Council of Gipuzkoa and the Basque Government have given an account of their work in their respective areas and explained the commitments made. The meeting served to share the follow-up of the Plan that OGP Euskadi has drawn up in collaboration with Basque citizens for the period 2021-2024.

At the event, the open government expert Rudi Borrmann stressed in his speech that the Basque Country has always been a reference for the Open Government Partnership, “the Basque Country has always been an international reference in this area and an example of shared action plans.” He also valued the actions carried out in the Basque Country related to its capacity to sustain and maintain regular forums with civil society in the long term, which is usually “a process that usually fails and becomes complicated after the first impulse, since that initial cooperation energy is lost,” he said.

Borrmann’s words were followed by the presentation of the Elkarlan and Open Data awards. The Minister congratulated the authors of the projects awarded with the Elkarlan 2021 Awards and the Open Data 2022 Awards. The former recognises innovative works of empowerment in the Basque Country, with new ways to make a person or a group of people strong or independent. It also aims to foster a network of people and projects that help create new ways for citizens to become more involved. The Open Data the Basque Country Awards recognise ideas and applications for the reuse of open data from the catalogues of Basque public administrations.

The seventh edition of the Elkarlan Awards promoted by the Department of Public Governance and Self-Government, through the Directorate of Citizen Services and Digital Services, counted on the participation of 45 projects. The four recipients of the award are:

Nagusilan is an association of social volunteers for the elderly that over its 25 years of experience has worked to ensure that the elderly continue to be active and contribute to society after retirement and that they do so in a self-managed and participatory manner with public agents. It is a project where they can demonstrate and offer all their vital and professional experience at the service of improving the situation of people and society and this gives them a feeling of usefulness and value that empowers them as individuals and as a group, feeling useful and valued.

The association has created a documentary, ‘Nagusilan, 25 urte’, in which the elderly volunteers themselves tell the story of the work, function and evolution of this organisation.

The European Network for the Fight against Poverty and Exclusion Association of the Basque Country is working to set up the necessary mechanisms to ensure that people in vulnerable situations are increasingly involved both in the network itself and in the entities and services in which they are assisted. With the aim of giving a voice to people in vulnerable situations and raising their proposals to make them reach the right people, this association advocates maintaining a dynamic that favours the participation of people in all areas of their lives. In short, it works to ensure that people are part of their community, take part in the decisions that concern them, have their voices heard and their opinions taken into account.

The Cultural Innovation, Arts and Society Association, Artehazia, is carrying out a project with people between the ages of 14 and 25, with whom it is working to ensure that these young people are not only a driving force, but also agents of social change. To this end, it has formed 8 working groups covering all areas of Vitoria-Gasteiz. In addition to people with certain social or integration problems, it also includes people who participate in leisure time groups or youth associations.

All the people in this association work on common challenges such as diversity, mental health in young people, street violence, stereotypes in social networks and bullying, and sexual diversity. Subsequently, they shape everything they have worked on into an artistic work or performance, a task in which all the adolescents and young people who have participated in the project will take part.

Emaús Fundación Social has promoted an educational, cultural and social process aimed primarily at children, providing them with materials discarded in the industrial sector, in order to encourage their natural desire to investigate and experiment and to work on their creativity. This activity also promotes a circular economy process, revaluing and extending the life of these materials.

This project, called Birsortu, aims to activate the dynamisation processes of agents in the territory for the social and economic transformation of Gipuzkoa. To date, the project has involved 35 educational centres, 25 companies and the material recovered in Birsortu has been used by more than 1,000 students in the Basque Country.

In this fourth edition of the awards, the winning projects and ideas are:

*Best application: Unai Antero - ‘enEKO: Intelligent assistant for energy saving.’ This is an application to help users save energy. EnEKO is a virtual assistant whose main function is to provide easy access to the information needed to make a more rational use of energy, through the knowledge of the best price of energy.

*Second best application: Ander Fernández - ‘iApparca: Find the nearest free parking space thanks to Artificial Intelligence.’ This is a web application based on Donostia-San Sebastián City Council’s open data that helps tourists to plan their trips by indicating the car park with free spaces closest to their destination.

*Best idea: Adriana Aguirre, Mathilde Marengo and Iacopo Neri - ‘Lur: A DSS for sustainable strategic planning based on the multifunctional value of land.’ This is a proposal to develop an assessment tool capable of measuring soil resilience. Through an approach based on data analysis, this tool would generate a new responsive taxonomy to understand the value of ecosystem services provided by the soil in a dynamic way.

*Second best idea: Sergio Díaz and Antonio José Sáez - ‘With OpenData my allergy is no longer a problem.’ It proposes to provide Basque citizens who are allergic to pollen with a tool to predict episodes caused by high pollen levels, taking into account key factors such as temperature, air quality and rainfall. In addition, in the event of an episode requiring medical attention, it shows the nearest health centre.