Minister Beatriz Artolazabal: "Nothing change the human sentiment of Solidarity" 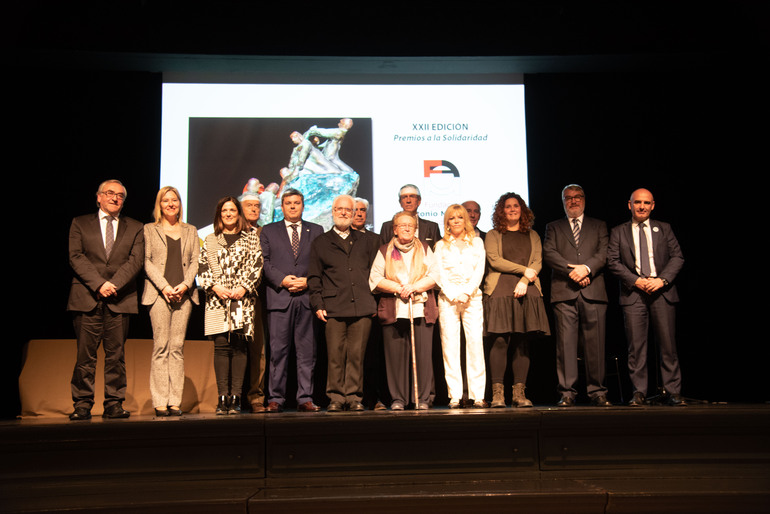 The Minister for Equality, Justice and Social Policies of the Basque Government, Mrs. Beatriz Artolazabal, considers that "wars, pandemics, the depletion of energy resources, climate change, technological and digital revolutions, changes in production processes, movements migration and other factors are marking a change of era, but what nothing is going to change or modify is the human feeling of Solidarity”. Artolazabal has participated in the Menchaca Foundation Solidarity Awards gala dedicated to the Izangai Association, Carmen Rotaetxe, Román Elexpuru and the EITB Maratoia initiative against multiple sclerosis.

At the meeting, held in the BBK room in Bilbao and chaired by María Menchaca, Artolazabal pointed out “nothing is going to change in the need for support for the most vulnerable person and group. The Basque Government and social entities such as the Menchaca Foundation- work every day in solidarity and in support of the people and societies that need it most”.

“Perhaps societies, countries or states are radically modifying many traditional concepts or situations to which we were accustomed. Perhaps we´re witnessing a new time for Humanity, with different forms of relationship, but this has always happened in history. With all the knowledge and practice that we now have, our societies must focus more on reducing inequalities and on creating a more open and sustainable world”, indicated Minister Artolazabal.

“They are associations and people who work in social action and who support socially excluded people and those who do not have any other type of financial aid to carry out their activities. This initiative is appreciated and from the Basque Government and its Department of Equality, Justice and Social Policies we recognize in a special way this commitment and vocation”, highlighted Beatriz Artolazabal.

According to the head of Basque Social Policies “The positive Basque position is often highlighted among the most developed and advanced societies of the State and of the European Union, it is true. But here, as in countries similar to the Basque Country, there are also human needs and inequalities that, from the Institutions, and from organizations such as the Antonio Menchaca Foundation, we try to reduce”.

Minister Artolazabal recalled “This week -last Tuesday- our planet exceeded 8 million inhabitants. 52 years ago, in 1950, there were less than half: 2.5 billion people on the Earth. It´s an unprecedented growth of the world population. In addition, in advanced societies, there is a gradual increase in life expectancy due to advances in health, nutrition, customs, hygiene and medicine. However, that only happens in advanced societies. Some societies that, despite their progress, also register strong inequalities”.

“In the poorest countries in terms of social development, despite their natural resources, their populations do not benefit from their wealth and potential. That is where world society has to focus its gaze. Basque society has to start doing it right here, helping those who have the least possibilities, just as your Foundation and the associations recognized today do” she has qualified.

As explained by Minister Artolazabal, “the UN forecasts a global demographic slowdown: it will take fifteen years to reach 9,000 million inhabitants in 2037. There will be 10,400 million people in the 2080s and, later, stagnation will come until the end of the century. Obviously, despite all these population changes, inequalities remain when they do not multiply”.