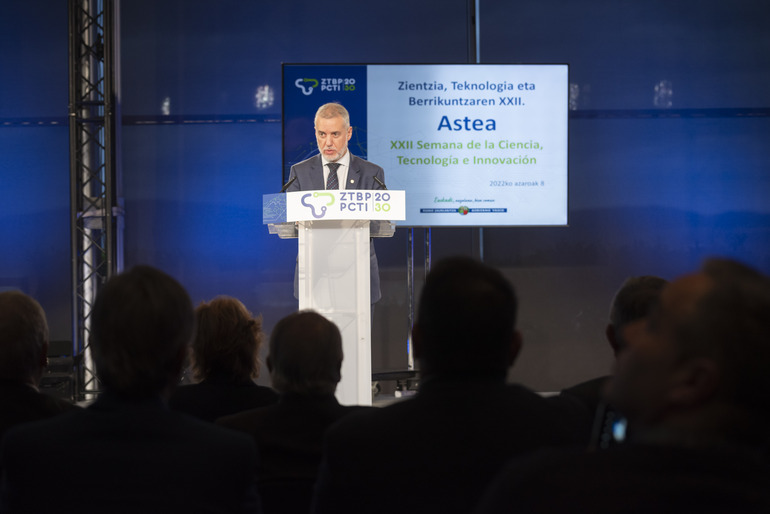 In his presentation, the Lehendakari stressed that Astea has established itself as a benchmark event open to society as a whole, which has made it possible to highlight research and innovation and to publicise the latest scientific and technological advances developed in the Basque Country. The Week fulfils an important and necessary task, which serves to bring research activity closer to its main beneficiaries: the general public.

He stated that science is a driving force for human development and a continuous search for knowledge and that improving people’s lives is the most noble contribution of science. Research must contribute to economic progress and to the resolution of society’s main challenges, as has been demonstrated recently with the pandemic.

This principle, the Lehendakari stressed, continues to be valid when we face new challenges and difficulties arising from the global geopolitical situation, the war in Ukraine, economic and energy tensions and climate change.

The Lehendakari ended by appealing once again, in these highly demanding times, to shared responsibility and commitment. “According to the ‘auzolana’ philosophy, we must all play our part in the construction of a better future for the Basque Country. A future that necessarily involves innovation,” he said.

The Basque Country, a leader in R&D investment

As stated in the recently published “Report on Science in the Basque Country 2022,” the Basque Country is the leading autonomous community in Spain in terms of R&D investment, with 2.2% of gross domestic product. It also leads in the per capita return of European funds, almost tripling the Spanish average.

According to this report, Basque scientific production grew by 16% compared to pre-Pandemic production, doubling its value in the last decade. The percentage of publications in first quartile journals, those with the highest international prestige, has also doubled during this time, reaching 60%.

Finally, Eustat’s estimate of domestic R&D expenditure for 2021 is very positive: an increase of 10.4% over the previous year is forecast. This would be the largest increase since 2008, when the great global financial crisis began.

The Basque Government is working to give continuity to this investment effort because it understands that it is a strategic commitment to the future of the Basque Country. Along these lines, in 2022 it has increased its R&D&I support allocations by 10%. In 2023, the aim is to increase it by 12%, as stated in the draft budget that has just been presented.

These investments are making it possible to promote actions in the three pillars of the PCTI 2030: “Scientific Excellence”, “Industrial Technological Leadership” and “Open Innovation”, as well as in the “Talent” needed to guarantee its development.

It also supports the development of major emblematic R&D&I projects based on a public-private collaboration model, among which the following can be highlighted:

Faced with a scenario of uncertainty and economic slowdown, the Government remains committed to economic recovery and the generation of employment opportunities. Quality employment in knowledge-intensive sectors, based on research and innovation.

The Basque Country takes a stance on the challenges and opportunities associated with the technological-digital, energy-ecological, social and health transitions

After the inauguration of the “22nd Science, Technology and Innovation Week” by the Lehendakari, the journalist Dani Alvarez moderated three roundtables on the three technological-digital, energy-climatic and social and health transitions.

The roundtables were attended by several members of the Basque Council for Science, Technology and Innovation:

The issues debated included how we are positioning ourselves in the Basque Country in the face of the new challenges and opportunities associated with the three transitions mentioned above.

The Basque Council for Science, Technology and Innovation highlights Talent as a critical element for progress and is committed to positioning the Basque Country as a benchmark in entrepreneurship and disruptive innovation

Prior to the inauguration of the Week, the Lehendakari chaired the Basque Council for Science, Technology and Innovation, the highest body for guiding, advising, and promoting R&D&I support policies in the Basque Country.

At the meeting, the main advances of the Euskadi 2030 Science, Technology and Innovation Plan were presented, as well as the RIS3 Euskadi smart specialisation areas. A dynamic reconfiguration of the working groups of the steering groups is taking place, in order to adapt to new needs and opportunities. The progress made in the international positioning of the Basque Science, Technology and Internationalisation System, linked to greater directionality towards economic, social, and environmental sustainability was also noted.

Likewise, the approval of 107 million euros in subsidies for 2022 for 120 R&D&I projects led by companies and agents of the Basque Science, Technology and Innovation Network, as well as scientific-technological infrastructures, through programmes of the Department of Economic Development, Sustainability and Environment (Strategic Hazitek, Elkartek and Azpitek) was also reported.

Finally, the Council discussed two elements considered important for the development of the Basque innovation ecosystem: talent and the creation of start-ups under disruptive innovation models.