The preservation of the geological heritage, key to face the climate and biodiversity crisis 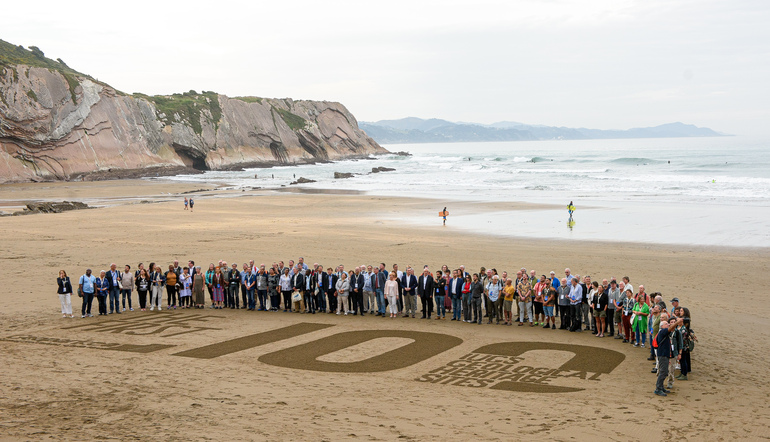 The preservation and cataloguing of geodiversity and geological heritage is essential to address the great environmental challenges of this century, such as the biodiversity crisis, global warming, water management, demand for raw materials, energy resources, natural risks, and the sustainability of populations, among other issues. And this must be done with policies based on scientific knowledge. This is reflected in the institutional declaration which was read today during the closing of the meeting of the International Union of Geological Sciences – IUGS, which has been held from 25 to 28 October in the Geopark of the Basque Coast, in Zumaia.

The Minister of Economic Development, Sustainability and Environment, Arantxa Tapia, has presided over the main event celebrating the 60th anniversary of which the "Zumaia Declaration" has been read, the largest public positioning carried out by the international Earth Sciences community. Amaia Barredo, Deputy Minister of Environmental Sustainability, and Adolfo Uriarte, Director of Natural Heritage and Climate Change, participated in the event, along with the deputy general of Gipuzkoa, Markel Olano, the mayor of Zumaia, Iñaki Ostolaza, the president of the Global Network of Geoparks, Nickolas Zouros and the president of the International Union of Geological Sciences-IUGS John Ludden.

Minister Arantxa Tapia has pointed out that "it is an honor to receive in Zumaia an extensive scientific community around geology." He recalled that the Basque people are a people rooted to the land "we are a small territory, but geologically very rich and very varied". In reference to climate change, she pointed out that "what is happening to the planet today has already happened in some way in the geological past, but now we are the main causes of the change" and considered "the conservation of geological heritage, key to tackling the climate and biodiversity crisis".

More than 250 specialists from 40 nations and ten international organizations, representing different disciplines of Earth Sciences, have participated in this international meeting in which the selection of the top 100 places of geological heritage (The First IUGS Geological Heritage Sites) has also been presented, among which appears the Zumaia flysch, one of the most extraordinary stratigraphic outcrops on Earth. The full list can be visited here: https://iugs-geoheritage.org.

In total, 186 candidate sites from 56 countries were proposed and evaluated by 33 international experts. A World Geological Heritage Site of the IUGS contains elements and/or geological processes of international scientific relevance, used as a reference, and/or with a substantial contribution to the development of geological sciences throughout history. The selection of the first 100 IUGS World Geological Heritage sites has been carried out within the framework of the UNESCO International Geoscience Programme.

About the International Union of Geological Sciences

The International Union of Geological Sciences (IUGS) is one of the largest scientific organizations in the world with 121 national members and affiliated associations representing more than one million specialists in the field. The first 100 sites of the IUGS world geological heritage are part of a program to designate geological sites around the world that are iconic and recognized by the entire geoscientific community due to their impact on the knowledge of the Earth and its history.

The recognition of the IUGS provides visibility to these places. Identifies them as being of the highest scientific value. They are places that served to develop the science of geology. They are the world's best demonstrations of the geological characteristics and processes of the earth. These places represent fabulous discoveries about the Earth and its history.

Many of the “First 100” are well protected in national parks, geoparks, and nature reserves, but many others are not. The recognition and visibility of the “top 100” sites of the geological heritage of the IUGS may lead to further consideration of these, to their use as educational resources and, more importantly, to their preservation, as has been stated in the institutional declaration.