The Basque Country conveys to the European Commissioner for the Interior, Mrs Ylva Johansson, its concern for "the lives in danger of migrants who cross the Mediterranean and the Gibraltar Strait"

Embed video
Download mp4 video set (zip)
The Basque Country conveys to the European Commissioner for the Interior, Mrs Ylva Johansson, its concern for "the lives in danger of migrants who cross the Mediterranean and the Gibraltar Strait" Source: Irekia 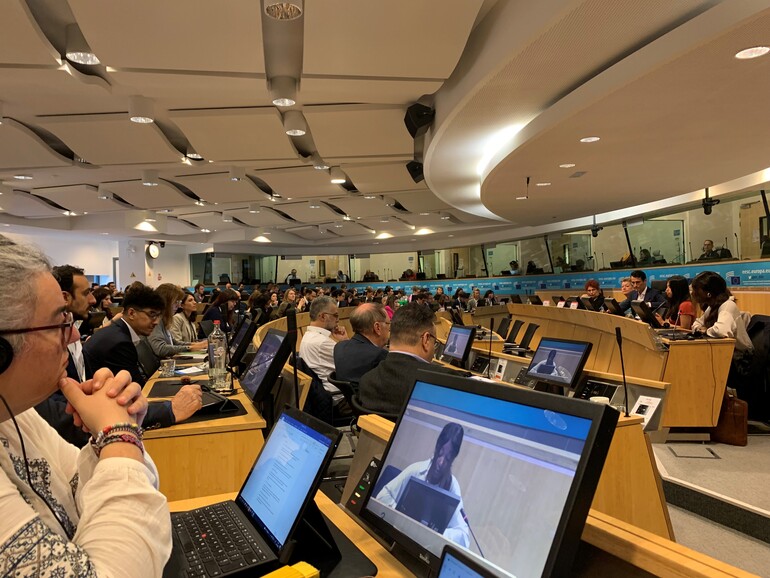 The director of the Department of Equality, Justice and Social Policies of the Basque Government, Mrs Noemi Ostolaza, this morning conveyed to the European Commissioner for the Interior, Mrs Ylva Johansson, her concern for "the lives in danger of migrants who cross the Mediterranean and the Gibraltar Strait” and has remembered those who have lost their lives in these migratory movements.

Ostolaza has spoken at the closing ceremony of the 7th European Migration Forum held in Brussels, organized in Brussels by the European Economic and Social Centre and the European Commission. In the two days that the meeting has lasted, two hundred representatives of social organizations, NGOs, European regional and regional institutions and state delegations have participated.

“In the Basque Country (Euskadi original language) we make a great effort to integrate both people called “irregulars” and “refugees”. All of them are going to contribute a lot to our society and they deserve the humane and caring attention that we dedicate to them”, Ostolaza told Johansson. “I especially remember those who have died trying in the waters of the Canary Islands, the Mediterranean and even in the Bidasoa River. People who manage to reach Euskadi once again risk their lives to access northern Europe. The fact that extra-community borders are dangerous is serious, but that internal “border” are also dangerous, has to make the European Union think”

The director of the Cabinet of Equality, Justice and Social Policies of the Basque Government has referred especially to the Aita Mari ship “which performs a great task saving lives, generating hope and, like others, are sometimes treated as criminals. The European Union must support these initiatives that save human lives”.

In her speech, the European Commissioner for the Interior, Ylva Johansson, made a special reference to the millions of people displaced by the war in Ukraine. The Forum addressed other issues related to care for Migrants and Asylees, migrant youth, and state and European legislation and regulations related to the subject.

The 7th European Migration Forum: Young migrants and refugees should get the same support, regardless of their origin

European organised civil society and citizens have shown unprecedented solidarity with Ukrainian refugees, throwing open their homes, helping these refugees enter the labour market and quickly integrating Ukrainian children into European schools. The EU should now learn from this success story to help all refugees and migrants, the 2022 Forum said.

Held for the seventh time by the European Commission and the European Economic and Social Committee (EESC), the European Migration Forum (EMF) focused on giving young people a role in migrant integration in order to ensure a successful outcome.

The EMF, a platform for dialogue between civil society, institutions and authorities, shone a spotlight on youth education and training, participation and engagement of young refugees and migrants in society and political life, youth mobility and specific challenges and measures linked to youth integration, especially against the backdrop of the many young refugees arriving from Ukraine.

The EESC president, Christa Schweng said: We are grateful to the Member States and their civil society organisations and local communities for the tremendous efforts they have made to welcome and integrate 7.6 million Ukrainian refugees, most of them children, young people and women.

However, the EESC president warned that We should not overlook migrants and refugees from other parts of the world. They also deserve our attention.

The EESC president highlighted that it was important fort young people to receive the right support and guidance – in terms of language learning, education and social assistance - early on so that they are on an equal footing with their local counterparts. This would allow them to thrive and deploy their talents, also contributing in this way to the society and to EU's recovery.

The Commissioner for Migration, Home Affairs and Citizenship, Ylva Johansson, said: We wanted to encourage the solidarity shown by European citizens towards Ukrainian refugees and to keep up this momentum. We all worked together with a single purpose. We dealt with all the challenges together.

Thanks to the efforts of civil society organisations and local and national authorities on the ground, millions of Ukrainian refugees quickly found homes in the local community. Around 670 000 children from Ukraine are now going to school in the EU, and Ukrainian teachers can teach in European schools thanks to quick recognition of their skills and qualifications. At least 400 000 Ukrainians have found jobs so far.

In addition to assisting with funding and coordination, the Commission has launched several initiatives to further help refugees become integrated, such as the Safe Homes Initiative and the Talent Pool Pilot, which aims to match up job seekers' skills with job vacancies. Both the action plan on integration and inclusion and the legal migration skills and talents package are intended to improve integration.

In the last eight months, we have made history together. We must learn from this experience to help all refugees and migrants. We must learn how we can build even better systems in the future and how we can use what we are doing right now to inspire us to be better prepared for future migration crises and for integration. We must build a Europe where everyone can feel at home, said the Commissioner.

Ms Johansson stressed that the right to this level of protection for Ukrainian refugees was made possible by the Temporary Protection Directive, activated for the first time in the 20 years that it has existed. The directive guarantees the same standard of protection for refugees across all Member States, which would not otherwise be the case. However, this directive has an expiry date and cannot be prolonged indefinitely.

Spanning two days (20 and 21 October), the EMF gave the floor to more than 120 civil society organisations from across the European Union, as well as representatives from local and regional authorities, Member States and EU institutions. The EMF showcased how civil society is assisting young refugees and people of migrant background, including those from Syria, Afghanistan and the Democratic Republic of Congo, via a range of activities such as mentoring and sport. The EMF also welcomed exceptional young leaders from across the world, such as the Philippines and the Western Balkans, who reminded the audience the importance of giving young people a voice. The theme and programme for the event drew on input from civil society organisations given during the consultations in spring 2022.

The EMF hosted a number of interactive panel debates and workshops: on young migrants as actors to youth inclusion; the public attitudes towards migrants, as well as on youth participation, access to education and youth mobility. Public attitudes towards migrants were also on the agenda. Participants stressed the importance of launching campaigns based on hope, which rely on facts and figures as well as on emotional connections to bring people together. This can be instrumental in helping to shift mindsets and change the narrative, which are often based on fear and negativity.

The EESC has been active in representing youth organisations as well as in assisting Ukrainian refugees. Through their organisations, EESC members have been actively helping Ukrainian refugees on the ground. The EESC hosts a Ukrainian Civil Society Hub where around 30 civil society representatives can continue with their work. Through the EU-Ukraine Civil Society Platform, EESC members are in regular contact with their Ukrainian counterparts.

At the same time, the EESC has done its utmost to ensure that the actions and initiatives underway to assist people fleeing Ukraine, notably the activation of the Temporary Protection Directive, become the standard for EU action in similar cases in the future.

Through its opinions and hearings, the EESC has also called for moves to bolster youth participation in the labour market and reinforce the skills and talents of all young people, including migrants.