20th European Week of Regions and Cities/EWRC2022: The Basque Country shows its commitment to and vision of the dual ecological and digital transition, and of European cohesion policy 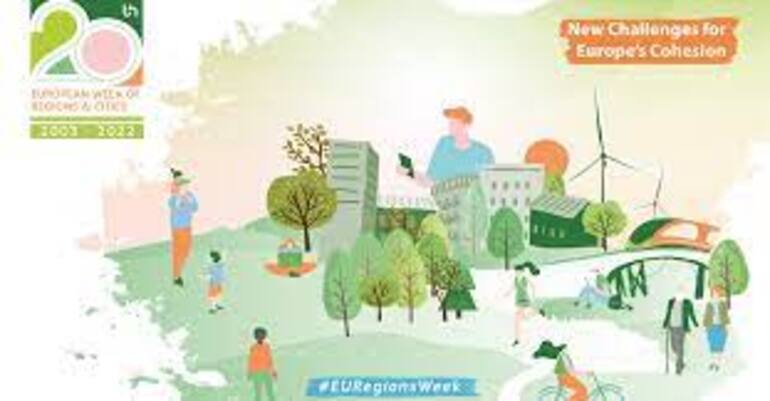 The twentieth edition of the European Week of Regions and Cities, organised by the EU institutions, this year focused on how cohesion policy is responding to the crises facing Europe in terms of European growth towards a green and digital transition.

Under the coordination of the Delegation of the Basque Country to the EU, and with this being the 19th consecutive year of Basque participation, the EWRC2022 has consolidated itself as the leading EU forum to influence and position the voice of local and regional authorities on the European agenda, in the face of the main European challenges and global challenges. EWRC2022, held in Brussels from 10-13 October, attracted 15,000 participants in person and online, as well as 300 discussion forums with over 1,000 speakers. The themes of the European Week of Regions and Cities were green and digital transition, territorial cohesion, and youth empowerment.

With Basque participation in more than 7 European forums, representatives of the Basque Government, local authorities and socio-economic agents have taken part in various seminars and meetings held with European partners. Good practices in areas such as sustainability in the blue economy, the food system and the environment, as well as digital transformation and the potential of smart specialisation in inter-regional and cross-border cooperation were discussed and presented.

19th Basque participation in the EWRC2021

A representative from ELIKA/Basque Foundation for Food Security spoke at a conference on the “Farm to Fork” strategy and food systems. The panel presented inspiring approaches to multiple aspects of the sustainability of the food system and the importance of maintaining strong roots in the regions. ELIKA, in particular, presented the Basque Strategy against Food Waste.

The City Council of Vitoria-Gasteiz was also invited to take part in a conference on sustainable environmental conservation and urban planning. In relation to the potential of regional and cross-border cooperation, both IHOBE (public company for environmental management) and the Euroregion: Nouvelle Aquitaine, Euskadi, and Navarre, defended in different European forums the role of regional ecosystems in favour of university cooperation and specialisation of the territory to fight against climate change. The digital transformation was also echoed in the European forum, presenting the best practices of the Basque Country through a representative of the Basque university system.

Cohesion policy, being the EU’s main investment policy, accounts for approximately one third of the EU budget. The aim of this policy is to reduce economic, social, and territorial disparities within the European Union. Recently, the policy has also helped EU regions to cope with the consequences of the major crises Europe has experienced in recent years.

Cohesion policy has been at the forefront of the fight against the COVID-19 pandemic or the Russian invasion of Ukraine. Thanks to the Recovery Assistance for Cohesion and the Territories of Europe (REACT-EU), the Member States have already earmarked 45.2 billion euros for recovery following the pandemic, which they are starting to implement on the ground. With the Cohesion’s Action for Refugees in Europe (CARE), the Commission has disbursed an additional 10 billion euros to assist the Member States hosting refugees from Ukraine. A further 330 million euros of cohesion policy funding is foreseen to help meet the needs of refugees.

In addition, cohesion policy has contributed to the realisation of energy efficiency projects with some EUR 19.2 billion, of which EUR 15 billion was for the renovation of buildings. On the other hand, the Just Transition Facility will help mobilise private investment, which is much needed for future energy efficiency projects to reduce Europe’s dependence on Russian gas.