Minister Beatriz Artolazabal, in Laguardia, in the talk and exhibition "Women in the culture of wine" by Jesús Fernández 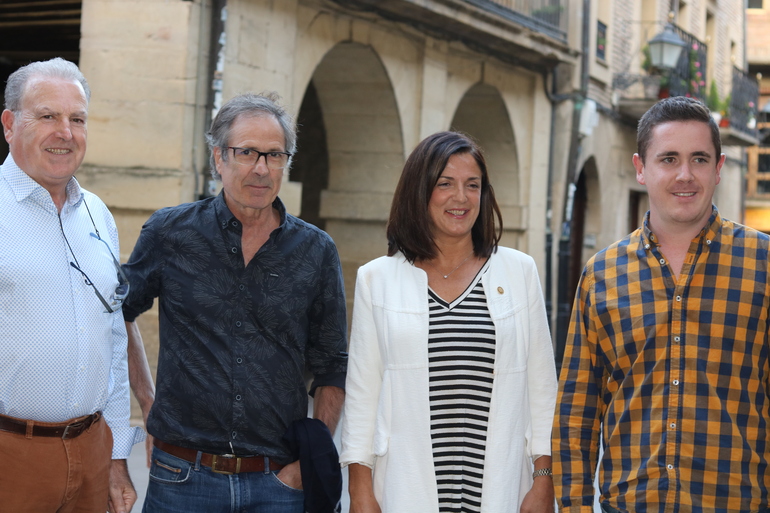 The Minister of Equality, Justice and Social Policies of the Basque Government, Mrs Beatriz Artolazabal, has attended the talk "WOMEN IN THE CULTURE OF WINE" by Jesús Fernández, visiting the exhibition that, with the same title, opened at the Tourist Office of the House of the Egrets, from Laguardia (Araba-Álava). "We are making visible the work that women do in the rural world" highlighted Artolazabal

Jesús Fernández Ibañez combines the research and dissemination of historical and cultural issues of his native town. He has been disseminating issues related to Elciego for more than a decade, where he has exhibited more than three hundred articles. Publications such as "Elciego 1583-1983, a walk through the historic town of Elciego", "Memories of a master winemaker" and "Women in the culture of wine" are a sample of the work of recovery, interpretation and historical dissemination of the population native of him.

The author of the Expo was the Director of Centres and planning of the Basque Government, a teacher and enabled for musical education in the Compulsory Secondary School and, for 17 years, director of the Astrabudua Secondary Education Institute, in Erandio. In addition, he has written publications on Basque folklore, ethnography and history.

The Exhibition entitled "Emakumea Ardogintzan- Women in the Culture of Wine" began its journey ten months ago in Elciego-Zieko, Vitoria-Gasteiz and various towns in Gipuzkoa. The artist Mintxo Cemillán is the author of the illustrations and exhibition panels.

According to Jesús Fernández, “Obviously women do not have the same roles as men in the world of the countryside, but they do have many shared activities and others, especially from this 21st century. To speak of wine culture is to refer to agricultural work, wine tourism and rural tourism, marketing, services and everything that this entails today. Of the capacity of Elciego, in 1898, 40 percent were women”.

The twenty large panels collect different aspects of traditional wine culture with female participation. “They are more than 400 years contextualized in one of the most emblematic and historical towns of Rioja wine. Until the third part of the 19th century, the work of the vineyards and winemaking did not undergo any variation from many previous centuries. Everything was manual and needed human power, so the female presence was more limited to housekeeping, “espergura”, harvest and help in winemaking. Now that's it and that's it,” details Fernández.

With the new French-style wineries, the industrialization of production and the use of animal power in the vineyards, new occupations created such as the marketing of wine in bottles, labelled and prepared for a more detailed trade. On the contrary, the small properties continued for several decades reproducing what they had learned from their ancestors.

“Since the 1980s, the accelerated modernization of work in the vineyards has required more sophisticated machinery, even more so in winemaking and marketing. Laboratories to analyse wines, business administration, labelling and packaging design, wine advertising, specialized marketing and wine tourism. All of this, together with the socialization of wine consumption in public and private places, has erased the traditional ideas that wine culture has a masculine face,” pointed out Fernández Ibañez.

The Exhibition has a pedagogical aspect that can used as a didactic unit to delve into the traditional culture of wine in Rioja Alavesa and the leading role of women throughout this journey.