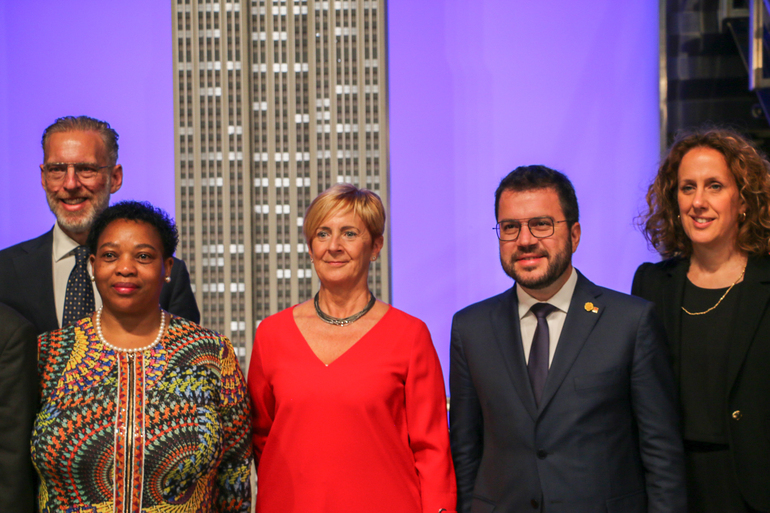 The Climate Group has selected the Basque Country for an international project to measure greenhouse gas (GHG) emissions via satellite, which will facilitate the definition of effective and personalised mitigation actions. This was announced by the Basque Minister for Economic Development, Sustainability and the Environment, Arantxa Tapia, at the Climate Week that is currently being held in New York.

The Basque Country is among the six regions participating in this initiative along with Abruzzo (Italy), Jalisco (Mexico), Pernambuco (Brazil), Querétaro (Mexico) and the Western Cape (South Africa).

The Climate Group will also work with the six regions to support the planning and implementation of tailor-made strategies to initiate, enhance or accelerate climate action within each regional jurisdiction. During the deployment of the project, each region will set itself a target, for example, to improve its climate change mitigation strategies.

The system incorporates different types of satellite images (visible light, infra-red...) collected by various space agencies and organisations worldwide. Artificial intelligence is "trained" to detect indicators of greenhouse gas emissions in satellite images. The models have been developed by various institutes and universities and calibrated with real data and emission inventories.

Recognition of the Basque Country

Satellite-based gas detection is becoming a tool to support inventories calculated "bottom-up" according to the UN Guidelines for National Inventory Calculation.

The choice of the Basque Country is an opportunity to refine the data that make up the  Basque Country’s Greenhouse Gas Inventory, drawn up under UN guidelines and published annually by the Basque Government's Public Environmental Management Company, Ihobe, and the Basque Energy Agency (EVE). The history of this tool highlights the role and commitment that the Basque Country has assumed in this field, going beyond the framework of competence by taking on a task that the United Nations only requires of states.

The Basque Country's participation in this project is recognition of its close international cooperation with The Climate Group, a network that includes more than 500 multinational companies in 175 markets around the world. It is part of the Under2 Coalition, which is made up of more than 260 governments, representing 1.75 billion people and 50% of the global economy.

Within the framework of Climate Week, the Basque delegation is completing an intense agenda in which the Basque Minister, Arantxa Tapia, and the Basque delegate in the United States, Unai Tellería, are raising awareness of the comprehensive approach to climate action, which requires not only strengthening and expanding the regulatory framework but also maintaining a firm commitment to politics, funding and cooperation at all levels and between all agents. The Basque Country is one of the 22 regions worldwide recognised by the United Nations as having the most ambitious goals in terms of reducing emissions and actions to adapt to climate change.

At the Climate Leaders' Reception , the Minister stressed that "to tackle the climate crisis, mitigation and adaptation must go hand in hand: emissions must be drastically reduced, but, at the same time, we must work urgently to adapt our regions to the impacts of climate change that we are already suffering". She pointed out that "extreme meteorological phenomena are becoming more and more recurrent. In the Basque Country, we have gone from a winter with floods and very high levels of rainfall, to a summer that has forced us to activate the first drought plan in the Basque Country". According to Tapia, “all of this must be done in a fair way, taking into account the most vulnerable population and geographical areas, based on the principles of co-responsibility and co-operation”.

Tapia also participated in the General Assembly of the Under2 Coalition, in which she highlighted the future Law on Energy Transition and Climate Change Law in the Basque Country, which is aligned with European directives and indicators and which will be "the tool that will allow us to advance in climate neutrality goals and the region’s resilience". She called for "accelerating the energy transition as more urgently than ever, we must move towards renewable energy" and for the decarbonisation of society, recalling that "industry plays a fundamental role" in the Basque Country. Between 2005 and 2020, the Basque business fabric has managed to reduce its greenhouse gas emission levels by almost 50%.

In this respect, Tapia highlighted some examples of specific actions, such as: