Bilbao, the definitive venue for BioSpain 2012 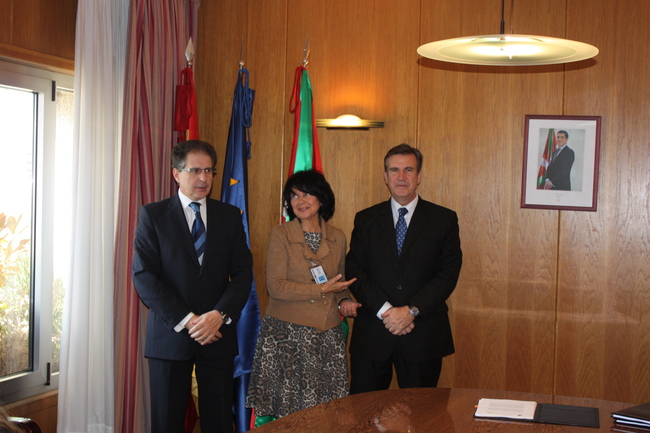 • The sixth edition of the commercial and exchange forum for biotechnology companies is to be celebrated in September 2012
• The previous edition, which took place in Pamplona, involved the participation of 700 companies
• SPRI (The Society for Competitive Transformation) and the Spanish Association of Biotechnology Companies (ASEBIO) have signed an agreement designating Bilbao as the venue for the next edition

Bilbao, the 3rd of November 2011. The Spanish Association of Biotechnology Companies (ASEBIO) and SPRI (The Society for Competitive Transformation), a dependency of the Basque Government's Ministry for Industry, Innovation, Trade and Tourism, today signed an agreement designating Bilbao as the venue for the celebration of the sixth edition of the BioSpain biennial event.

Between the 19th and the 21st of September 2012, the BEC in Barakaldo will host BioSpain, a forum for the exchange of knowledge, ideas and experiences amongst all agents involved in the biotechnology sector, which has become an important platform for the presentation of Spanish biotechnology at international level, enabling the sector to satisfy its commercial, academic and information needs.

BioSpain comprehends an industrial exhibition, conferences and a business platform with workshops for the transfer of technology with international scope running in parallel. It is structured into a trade show, a partnering event, an investors' forum, plenary sessions and conferences dealing with a wide range of subject matters with national and international speakers, a scientific congress offered by the Spanish Society for Biotechnology and an employment forum. It has become the most important event of its nature within the sector in the south of Europe and the partnering system ranks seventh at global level in terms of the number of meetings (2147) and companies involved (641).

Thus, the Basque Government's Vice-Minister for Innovation and Technology, Juan Goicolea, believes that "the celebration of BioSpain 2012 represents recognition for a sector that is already an economic reality in the Basque Country, possessing enormous potential for growth in forthcoming years. Therefore, Basque administrations will maintain their support, now via the BioBasque 2020 strategy".

In a similar vein, the president of ASEBIO, Regina Revilla, affirmed that "the Basque Country offers an excellent opportunity for the celebration of BioSpain 2012, as a result of its infrastructures and the important business and scientific fabric it boasts in relation to biotechnology".

Pamplona provided the venue for the previous edition, BioSpain 2010. This entailed the participation of 641 companies, of which 23% (55% more than in the 2008 edition) hailed from countries other than Spain. Furthermore, the event involved 134 stands, 15% more than BioSpain 2008, and 168 exhibitors, 29 of whom were not Spanish, compared to the four foreign exhibitors registered in BioSpain 2008. A total of 1300 participants were recorded, representing biotechnology companies, investors, institutions and researchers, amongst other areas.

The countries with the largest representation in BioSpain 2010, based on the number of participating companies, were as follows: Spain (77%), followed by France (5%), the United Kingdom (3.5%), the United States (3%) and Germany (2%). In total, the representatives of 25 countries attended the event.