The group of 82 young volunteers from the Basque Country, perfectly integrated into its missions in Africa and South America 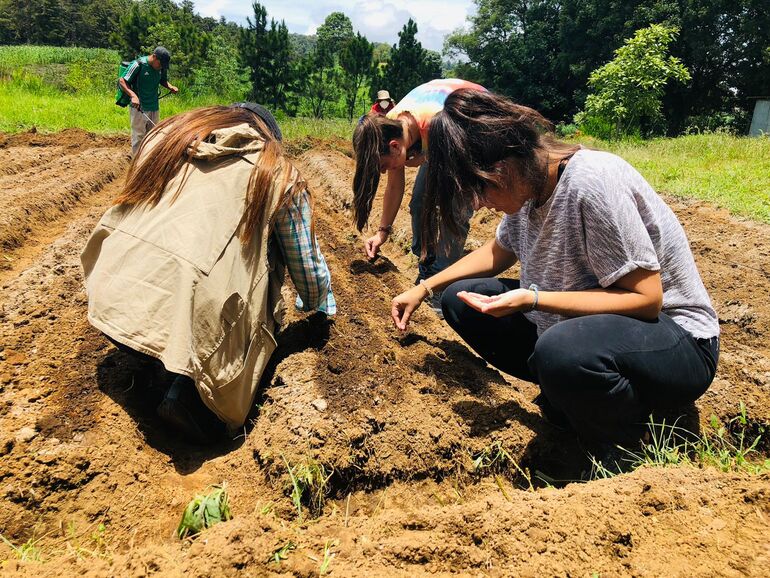 The activity of the programs that 82 young volunteers from Euskadi carry out this summer in various projects promoted by NGDOs fully developed after the period of adaptation and knowledge of their respective environments in South America and Africa. With the support of the Youth and eLankidetza/Development Cooperation directorates of the Basque Government, the cooperating volunteer group carries out various tasks in support of children, education, infrastructure maintenance and female empowerment

Leizuri Hernández (Berango) volunteers with the Salesian Missions in Medellín, Colombia, in contact with children who have experienced intense moments of violence. She narrates her experience in the form of a poem:

“Their glances at her radiated hatred,

The revolution sailed through her veins,

Her mouths that were full of empty ideologies,

They thought they knew what they were doing.

They snatched their childhood mercilessly.

Her playground on the battlefield.

They traded marbles for artillery,

Little by little, they no longer smiled,

They saw that their dreams would not flourish.

Easy to fool who missed school,

His commanders wanted it that way.

Teaching to assassinate and extort those who were not on her side was the teaching of their leaders.

If the children had learned to read and write and had created their own philosophy, they would not return to the jungle.

The anger towards the group they had idealized began.

They were tired of risking their lives for the one who hurt them.

Die in oblivion or fight for his future he had no choice,

Plan an escape as a way of survival,

Being able to tell your story so that others don't repeat it.

Disobedience and their bravery brought them back to life,

Supplant the comrade by the teacher.

Over time, their gazes turned into illusion.

Hope as a means of transformation,

Education is the only rebellion.

They exchanged weapons for pens and books:

They no longer had an owner, now they could write their own dreams.”

In El Salvador, Paula Sánchez (Vitoria-Gasteiz) and Aurkene Gil (Errenteria) collaborate with the NGO World Rural Forum. They carry out volunteering linked to research in jobs from 08:30 to 15:30. They indicate that they are "very well cared for" and working fully on their objective. Both believe that transportation, circumstantial and not subject to schedules, partly sets the pace of the country. Paula Sánchez and Aurkene Gil carry out agrarian promotion tasks.

In Honduras, Mónica Bahillo (Bilbao) and María Toral (Barakaldo) emphasize that their adaptation is easy. The first weeks carried out in the Maternal and Child Home, participating in a "health meeting", the creation of a garden, selecting the ideal vegetables for that environment and acquiring materials for it. Mónica and María participate in a project that the NGO Medicus Mundi Bizkaia develops together with the local organization ASODOC.

Claudia Urbizu (Donostia) is in Rwanda. She considers that “people are kind, very respectful and close. She participates in a project related to agriculture, in terms of collecting information. Although she experiences certain language limitations due to the population's lack of knowledge of English, she learns the local language. She makes various proposals, designs infographics and maps, generates content, and organizes training for twitter for local workers, unifying styles.

“Rural areas are awesome. One family gave us everything they had: beans, yucca and avocados. It is a very safe country with good weather despite the dry season,” explains Urbizu. In his free time, he does sports. He lives with several Nuns. "I'm very happy," he concludes.

Several months ago, the coordinating NGDOs explained to the group of young co-operators the tasks they now carry out in the destination countries, commenting on various singularities and questions about cooperation for development, health advice for international travel or gender and development, among others.