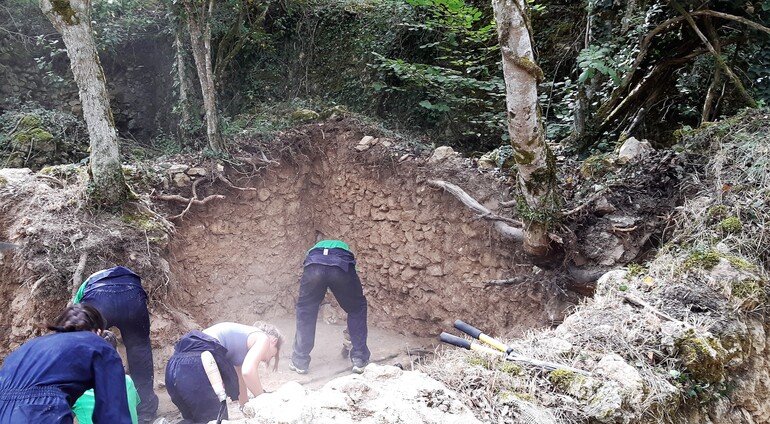 The Auzolandegi of Maeztu, a youth volunteer camp dedicated to recovering the industrial memory of an old asphalt factory in Araba/Basque Country, has finished its summer shifts with satisfaction regarding the result for both the municipality and the people responsible for the Management of the Youth of the Basque Government.

They have also completed the Murueta Auzolandegi (Bizkaia-Biscay), where groups of young people have spent a month recovering the “Dynamite” loading area, next to the Oka River. The initiative has been developed in collaboration with the Murueta City Council, the Urremendi association and the Basque Government Youth Directorate); and the first shift of the Lekeitio Auzolandegi has ended, with a "very positive" balance of the users of the Abaroa Residence and those responsible for it.

In Maeztu, girls and boys from all over the Basque Country have taken part in the works and have cleared paths and interiors of the old constructions of invasive vegetation, reinforcing walls and walls with cement and recovering the image of what was once an active industry of location.

Yesterday the Auzolandegiak of Lemoa, Sopuerta, Lekeitio II and Gorliz began their activity (in which young people from 14 to 18 years old participate for the first time). In all of them, landscape and environment recovery activities combined with sports and social activities in the surrounding towns.

The Basque Government has organized 12 volunteer camps within the 'Auzolandegiak / Youth Volunteer Camps' programme. In total, the Basque Country this year organizes fields with 295 places for minors (between 14 and 17 years old) and adults (18-26 years old; or 18-30 for people with functional diversity).

The San Ildefonso asphalt factory, in the municipality of Maeztu, was in operation from 1858 to 1913. During these 55 years, it became the first and largest asphalt exploitation in the State. It was a mining complex, bread factory and asphalt tiles made up of 8 buildings and several patios or open transit spaces.

Since 2016, several archaeological interventions have carried out aimed at recovering and rehabilitating this factory. This summer several rooms have been excavated that give access to other areas of the complex. In these excavations, the vegetation has cleaned and material used in industry has found.

With this project to recover the industrial heritage of the s. XIX, the City Council of Arraia-Maeztu, with the help of the Auzolandegi, carries out an action in the municipality that catalyses and stimulates the strengthening of local identity.