Irune Santamaría, youth representative of the Pyrenees Work Community, debates in Paris on "The role of youth in the construction of Cross-Border Territories" 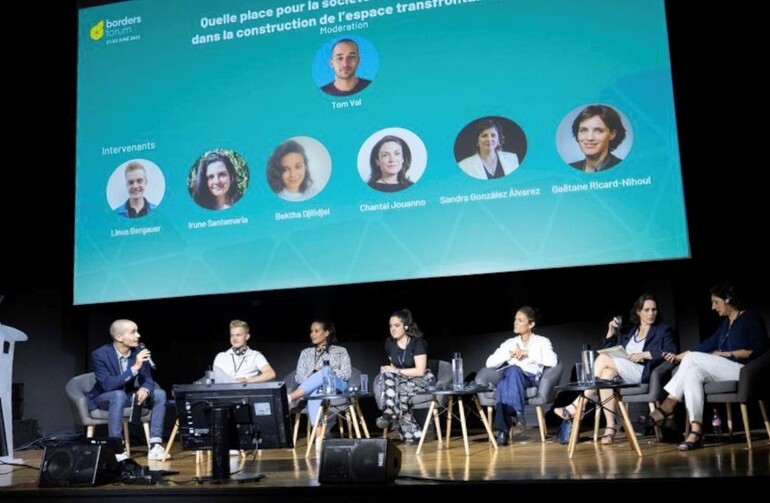 The young woman, Irune Santamaría, a student of Labour Relations and Social Work at the Faculty of Vitoria-Gasteiz, participated this afternoon in a debate at the International University of Paris on "The role of youth in the construction of cross-border territories". The spokesperson for the Youth of the Pyrenees has defended "the advisability of creating communication forums in which the youth on both sides of a border naturally overcome language difficulties".

Moderated by Tom Val, from Res Publica, they have spoken together with Irune Santamaría Linus Bergauer, a volunteer in the Great Franco-German Region, and Bektha Djilidjel, a former Interreg Youth volunteer. Joining them were Chantal Jouanno, President of the French National Union-Commission for Public Debate; Sandra González, mayor of Tomiño (Galicia) and Gaëtane Ricard-Nihoul, member of the Secretariat of the Conference on the Future of Europe.

The main organizer of the meeting is the Cross-Border Operational Mission (MOT), an association of cross-border territories and state and European institutions. The Forum  supported by the French National Agency for Territorial Cohesion.

The European Commission published last summer a report that sets out its priorities for border regions “key tools for European integration”. It suggests that these territories “should be taken into account in the Union's cohesion policy 2021-2027”. The European Committee of the Regions (CoR) is one of the main promoters of territorial cooperation and of the 80 European Groupings of Territorial Cooperation (EGTC).

Cross-border areas involve 30% of the European population. Two million European workers are cross-border. The organization of the conference estimates that “cross-border territories are absent from the recovery plans. However, they can be the leading territories for experimentation and innovation to meet the ambitions of the European Green Deal and embody the Europe of ecological transition.”

The II Cross-Border Forum "Borders Forum" began yesterday Tuesday with the theme "Cross-border territories: fatalism or resilience?" at the International University City in Paris focused on demonstrating the key role that cross-border areas play in uniting the peoples of Europe; convince European and state authorities to place cross-border territories at the centre of their public action and present France's proposal for cross-border territories. Marian Elorza, General Secretary of Foreign Action of the Basque Government, intervened in the debate on "Migration Challenges".