Mrs. Agurtzane Llano: "Performing regular surveys by the Basque Youth Observatory allows us to discover trends and design actions related to the challenges and needs of our youth" 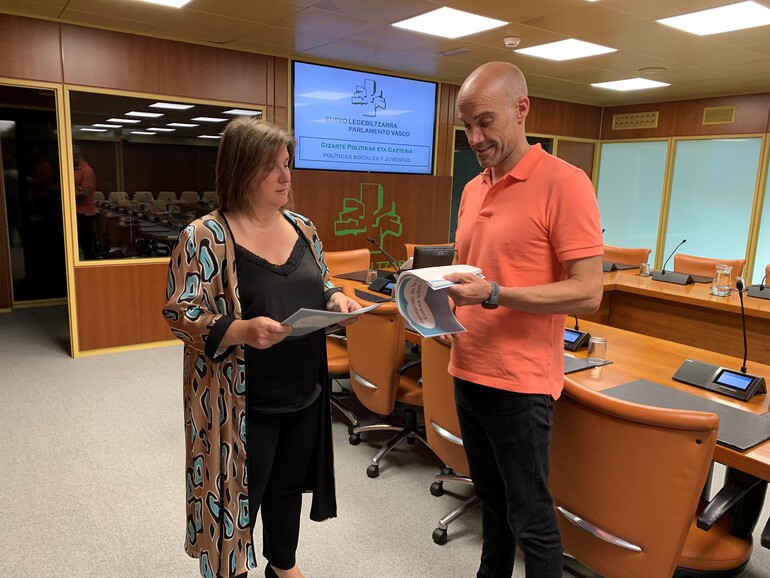 The Director of Youth of the Department of Equality, Justice and Social Policies of the Basque Government, Mrs. Agurtzane Llano, commented this morning in the Basque Parliament that the "carrying out of regular surveys and polls by the Basque Youth Observatory on all the issues that affect youth allows knowing the situation of young people and their trends so that, from the public administrations and the different social agents, policies are activated to improve actions in terms of prevention and awareness of homophobic violence”.

“When young people are asked about their perception of the existence of any type of violent homophobic attitude in society, violence is considered in a broad sense, including all its degrees: from the most subtle violence that includes violence symbolic, sometimes called invisible; disrespectful humour and discriminatory or stereotyping advertising against any person or group, as well as the most serious and explicit violence and sexual and physical assaults”. Llano pointed out in the parliamentary commission on Social Policies and Youth.

The Director of Youth of the Basque Government has offered various data from the Observatory among youth aged 15 to 30, among which it stands out that 40.8% of the youth of the Basque Country (“Euskadi” in original language) think that homophobic violence is "quite widespread" and 22, 2% believe that “it is very widespread”.

In those notes collected by the Basque Youth Observatory it detailed, “Young women indicate, to a greater extent than men, that this type of violence is widespread among youth. 72.5% of women and 53.9% of men think so”. "Surely this figure is due to a greater awareness of the female group towards any type of violence" explained the Director of Youth.

Mrs. Agurtzane Llano considers that “the action of the different agents should focus on working on prevention and awareness policies among young people together with initiatives aimed at intervention. The Director of Youth of the Basque Government has considered that “the greater sensitivity and lower tolerance towards homophobic behaviour of young people means that they perceive and show more violent behaviour than 40 or 50 years ago. Until not many years ago, for example, certain "micro machismos" went unnoticed, while now it is much more difficult for that to happen, due to greater awareness of society as a whole and of youth in particular.

“The technical work of the Basque Youth Observatory allows us to have a current and permanent picture of the situation of youth in different areas to design and promote specific policies. Today we show the data related to homophobia” added the Director.

"Fighting for the rights of LGTBI people and combating the discrimination that many of them still suffer today also requires the participation of associations of the LGTBI collective in the design of awareness, prevention and intervention policies," Llano recommended.

Likewise, Agurtzane Llano considers “essential the training of agents who work with young people, as is the case of teachers, which makes it possible to address diversity in the school environment from a broad dimension, detect the signs of LGTBIphobia and provide a response according to each situation. That is why, from Berdindu, the faculty of 58 schools have been trained, 34 for infants and primary schools, 21 for ESO and high school, and 3 for other types (FP, PCPI). In 2021, 2,079 teachers were trained and advised, according to data from the Directorate for Human Rights, Victims and Diversity”.

“Berdindu” program prioritizes the centres in which a case of transit of a student or student occurs. Thus, in 2021 workshops have held in 159 classrooms, 76 in infant and primary schools and 83 in secondary schools. With this, 3,220 male and female students have reached 1,516 girls, 1,605 boys and 99 who define themselves as non-binary.

“These are the data that we have in the Basque Youth Observatory regarding LGTBIphobia. We must keep moving forward. We collect data to act positively. With the permanent collection of data such as those produced by the Basque Youth Observatory, we will be able to establish an accurate diagnosis and continue designing strategies, programs and tools from public administrations to eradicate any type of violence in our society" concluded Mrs. Agurtzane Llano.