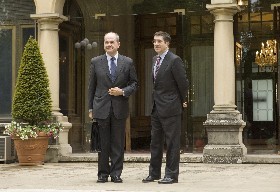 Recently installed Basque regional president Patxi López announced today that active central government employment policies would be transferred to his own government before 1 January 2010. Together with Spanish Public Administrations Minister Manuel Chaves, López headed a meeting this morning at the Basque President's Office between delegations from regional and central governments. The meeting was called for both sides to analyze all pending political issues. Their determination to come to an agreement " as soon as possible" was much in evidence.

At a joint press conference, López added that representatives at the meeting had also thrashed out the priorities, methodology and timetables for creating sector-by-sector negotiations to resolve the services still awaiting transfer.

"While continuing to defend the interests of people living in the Basque region, and the powers acknowledged in the Basque Devolution Act," López continued, "we're going to make a major effort where the transfer of powers is concerned. This is something the Spanish government, and, in this particular case, the Public Administrations Minister, Manuel Chaves, has taken on board completely." The regional president also said he was "very optimistic" about the possibility of "improving living standards" through the "political tools" the talks would eventually make available for continued self-government in the region and Basque society."

López thanked vice-president Chaves for "fast reflexes" in holding this first meeting, which he saw as part of the "normality" that-in his opinion-should preside over relations between regional and central governments, particularly when they sit down to "look into problems that affect them both."

"Rather than each side arguing in favour of irreconcilable points of view, we met to find common ground and complicity in solving outstanding issues and other shared interests", López added.

At today's meeting the two sides discussed the powers still awaiting transfer, with particular attention being paid to active employment policies, as they were-in López's own words-a "powerful tool" for improving the employability and training of the unemployed to ensure they were in the best possible conditions to access the labour market.

The Basque government has also presented a series of strategic innovation projects and initiatives designed to modernize the Basque economy. López has applied to central government for cooperation and financing.

Speaking after López, Spain's third vice-president Manuel Chaves, who doubles as Minister of Public Administration, stressed the importance of the meeting (reflected in the sheer number of representatives present in both delegations) and called on the political parties "to help towards normalizing" relations between the Basque regional and Spanish central governments.

"This is a particularly important point because normalization sets the best possible tone and context for working effectively," he declared.