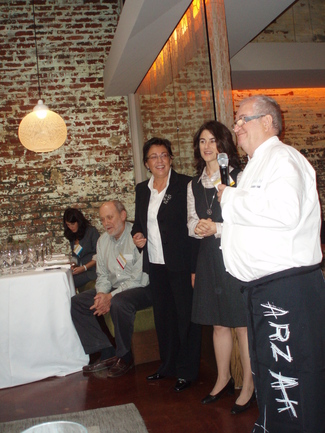 Approximately five hundred professionals linked to the food industry visited the showrooms organised by the Basque Government in New York and Washington last week to promote the introduction of the products of Basque companies into the North American market.

The Minister for Agriculture and Fishing, Pilar Unzalu, who described the business mission to the United States as "highly satisfactory", stressed that "above and beyond the visitor figures in the exhibition halls, which are very good, what is important is that we have taken the first step to draw closer, which is vital in order to raise awareness of the quality of our products and the expertise of our companies in an extensive and interesting market such as the U.S. market, wherein we wish to increase our presence".

Pilar Unzalu stated that the conferences held in the U.S. have proved "very intense and interesting", as they were attended by "suppliers, importers, the heads of gourmet establishments and restaurants and specialised journalist and food critics, who in this country are a reference point and opinion shapers with a great deal of social influence".

The Basque minister expressed her hope that the initial contacts made within the framework of the showrooms will serve to initiate new business deals and formalise orders destined for the U.S., which in certain cases has already occurred.
Pilar Unzalu also conveyed her contentment as a result of the positive evaluation of the companies with regards to the mission, "as it is a trip that has been organised for our companies within the food sector and to improve their ranking within the U.S. market".

Indeed, both Pilar Unzalu and the Vice-Minister for Food Industries, Jon Azkue, were able to verify that Basque products, noteworthy as a result of their quality, "have a place in the increasingly more numerous gourmet and organic products establishments in New York and Washington, where the clientele appreciates and discerns the quality, security and distinction afforded by our products".

The minister was also able to verify the presence of products produced in the Basque Country in a number if the gourmet establishments; however, she did not hesitate to point out that "we can strengthen this presence even further because we are highly competitive in terms of quality and people are willing to pay for this".

To date, Rioja Alavesa wine is the product that has made the greatest inroads into the U.S. market. The U.S. is the fourth most economically important market for our wines, after the United Kingdom, Switzerland and Germany.

Pilar Unzalu specified that "9% of our wine exports are destined for this country and the tendency is clearly on the increase. Between January and June of this year, we have exported wine valued at 6 million euros, 9.2% more than in the same period last year. In terms of volume, this represents a 5.9% increase, which, in addition, indicates that the product is being revalued".

The Basque minister expressed her conviction that the good impressions of the companies participating in the mission will be reflected in an increase of sales in the U.S.

The mission included the active participation of chefs such as Juan María Arzak, Martín Berasategui and Andoni Luis Aduriz.