The Basque Open Government model to be implemented in 44 countries 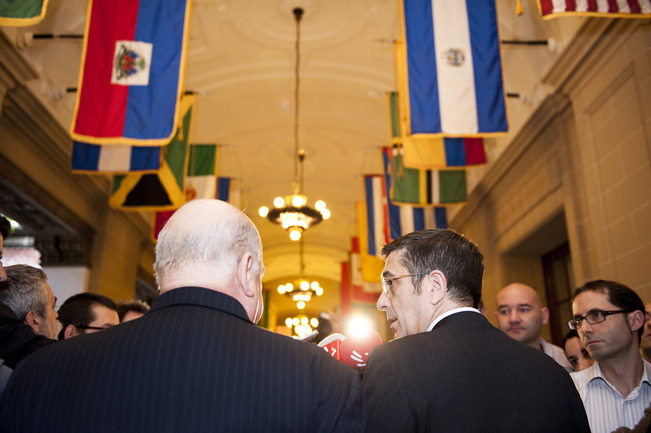 The Lehendakari's first meeting in Washington was with José Miguel Insulza, General Secretary of the Organization of American States, which had previously asked the Basque Government to provide the Irekia Open Government software in order to implement the model in its member states. The OAS has demonstrated interest and a desire to implement the Basque Open Government model to improve transparency and combat corruption

During the meeting between the Lehendakari and José Miguel Insulza, celebrated in the offices of the OAS, the General Secretary expressed great interest in transferring the Basque Open Government platform to all member states. "We see the Basque open government model as a form of management". In Insulza's opinion, Irekia is the perfect tool to address the needs of the OAS states, which, in many cases, are afflicted by corruption, fraud and poor management. Thus, the strengthening of institutionality, via the transparency that Irekia affords, was the main topic of discussion.

The Basque Open Government model will be presented to the 44 member states: a memorandum is to be issued in the forthcoming OAS summit. The memorandum will draw attention to the importance of the management model afforded by Irekia, as a symbol of transparency and participation. "We have provided the open source code to Mr Insulza", the Lehendakari explained, "with the objective of enabling each administration to download it, adapt it to their needs and employ it as a fundamental tool for Open Government". From this point forward, working groups will be set up to analyse institutional strengthening, competitiveness and open government.

One month ago, in the UN, several OAS members signed an alliance in favour of Open Government, expressing their commitment to put it into practice. The Basque Government will contribute the software to enable them to achieve transparency, the Lehendakari commented during the meeting.

In addition to Open Government, in the meeting the subjects of professional training systems and competitiveness were also addressed. Here, the Lehendakari presented the clusters model to José Miguel Insulza.