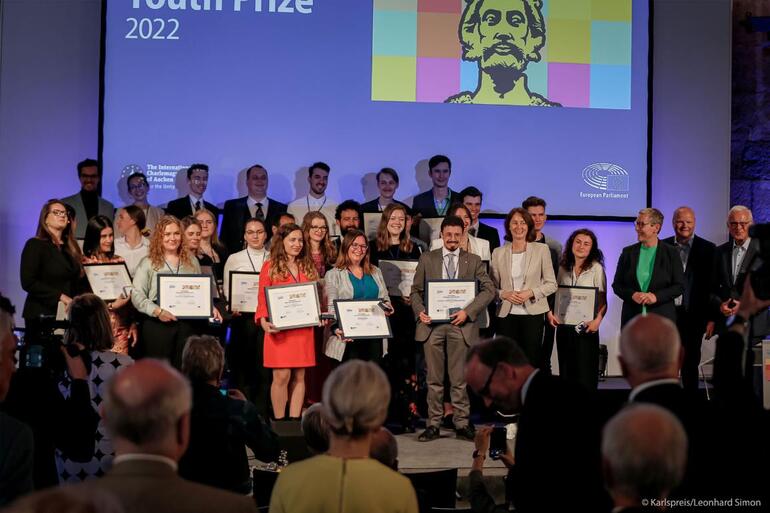 Charlemagne Youth Award 2022Each year, the juries select a project from each EU state.

Today, Tuesday, in Aachen, Germany, the "Charlemagne Prize" of the European Union was awarded to the "Orquestra Sem Fronteiras" (Orchest Without Borders) of Portugal, which promotes cross-border cooperation through the music of young talents with the purpose to mitigate, socially and culturally, inequalities. Every year the European Parliament, together with the International Charlemagne Prize Foundation, encourages young people between the ages of 16 and 30 from across the Union to submit projects that actively contribute to European and international knowledge. More than 4,650 projects have competed for the award since 2008.

Second prize went to the Czech project “Politika (nejen) pro mladé” (Politics (not only) for youth), which brings together young politicians from across the political spectrum to discuss politics, democracy and human rights, fighting for an informed and active young civil society.

The third prize obtained by the German project "Ukrainian Vibes - European Public Sphere", organized through Democracy International. The project, which ran from April to October 2021, brought together people from 36 countries in virtual discussions on democracy, development and European integration, highlighting EU-Ukraine relations.

Nominations for the Charlemagne Prize 2022

FRANCE - Espions to the Commission

GREECE - Towards a European Civic Service

Associations, youth groups or young people from the Basque Country who wish to do so can apply for the next edition of the Charlemagne Award 2023, which in January of next year will close the deadline for presentations, with the call being held in advance next autumn.

In general, projects must meet the following criteria: have shown achievements in the following fields: • promote cooperation and understanding both in Europe and internationally, based on democratic values (respect for human dignity, freedom, equality, rule of law and respect for human rights) • promote a shared sense of European identity and European integration; • encourage other young people in Europe to get involved in our democracy; and • offer practical examples of Europeans living together as a community.

Likewise, they must presented by a young person who resides in one of the 27 Member States of the EU and is between 16 and 30 years old on the date of the application. The projects will be evaluated according to the following criteria: • they have fulfilled the objectives of the award; •creativity and originality of the project, including innovative initiatives; priority to projects with a transnational dimension (involving young people from more than one Member State).

The selection made in two steps: the jury of each State decides the best project. Then, from the 27 winning state projects, the European jury decides the three winning European projects. The jury from each State made up of two members of the European Parliament and a representative of the youth sector, and selected annually.

The three winning European projects receive the following prizes: first prize €7,500, second prize €5,000 and third prize €2,500. Representatives of each of the state winning projects invited to the Charlemagne Youth Prize award ceremony in Aachen in May. As part of the prize, the European winners invited to visit the European Parliament, in Brussels or Strasbourg.