The Lehendakari holds a meeting with the Governor of Massachusetts 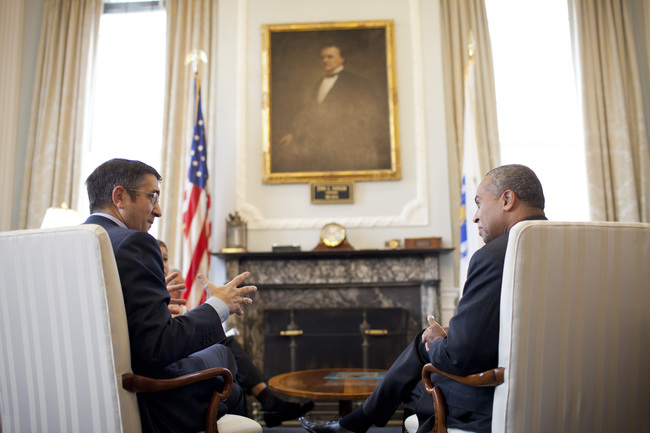 Over the course of the business mission to the U.S., the Lehendakari is set to maintain a number of institutional meetings

This morning, the city of Boston provided the venue for a meeting between the Lehendakari and Deval Laurdine Patrick, Governor of Massachusetts. During the meeting, the Governor and the Lehendakari addressed various subjects, such as the situation in Europe in terms of the crisis, the Basque Government's competitiveness policy and education.

The State of Massachusetts is often lauded as a result of its cultural and technical preparedness. It boasts the highest numbers of degree holders in engineering and sciences and is home to prestigious universities, such as Harvard, the MIT (Massachusetts Institute of Technology) and the Boston College. Thus, one of the areas that is of greatest interest to the Government of Massachusetts and the Government of the Basque Country is education and training.

The Basque Government's competitiveness policy was also discussed. The Lehendakari spoke of the Basque Government's commitment to innovation, research, intelligence and development, renewable energies and other scientific and technological areas. Finally, a significant portion of the meeting was given over to the role of the regions in the face of the global crisis.