Mikel Antón Zarragoitia: "The Conference on the Future of Europe offers a unique opportunity to learn about challenges and priorities related to youth and the Environment"

Embed video
Download mp4 video set (zip)
Mikel Antón Zarragoitia: "The Conference on the Future of Europe offers a unique opportunity to learn about challenges and priorities related to youth and the Environment" Source: Irekia 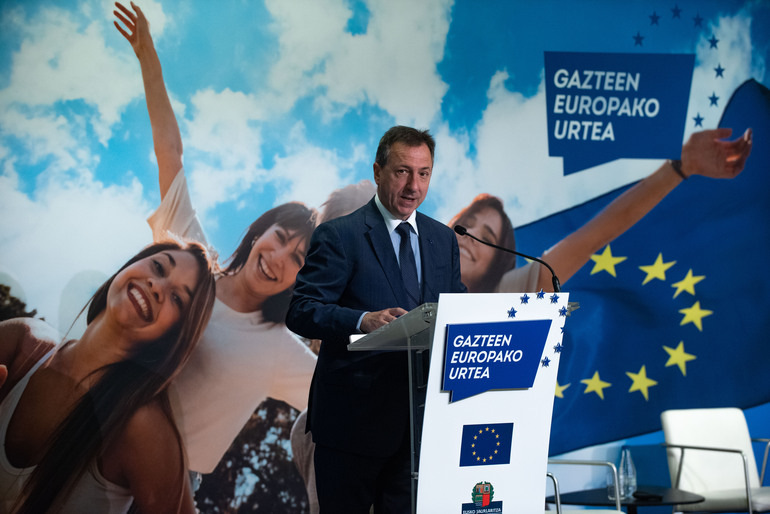 The Director of European Affairs of the Basque Government, Mikel Antón Zarragoitia, considers that "the Conference on the Future of Europe has provided a unique opportunity at the right time to learn about challenges and priorities and Euskadi, as a land committed and involved in the construction of a modern European Union. Fully joins this work and objectives, especially those related to youth and the environment. Basque youth plays one of the most valuable roles in the design of the European project”.

Mikel Antón, together with the director of Youth Agurtzane Llano, has chaired this morning the meeting “UEngage; Times to get involved” that the Basque Government has organized at the Azkuna Zentroa in Bilbao, within the European Year of Youth, today Europe Day.

Today, Monday, in Strasbourg, the closing session of the Conference on the Future of Europe held, which summarizes a long year of work by European citizens. “During this time, ideas have been collected and discussed on how the Union should face its challenges and opportunities. There, the Youth of the Union has had a special role,” indicated the Director of Foreign Action of the Basque Government.

Before a group of specialists, professors, representatives of the European Commission and young people, Mikel Antón indicated that "with the conflict in Ukraine, today's events, Europe Day, highlight the Union's commitment to Peace, Freedom, Democracy and Solidarity… now especially with Ukraine”.

“The European institutions had asked States and Countries to develop activities with debates and declarations in addition to the concerts and cultural events promoted by the Union itself. In the Basque Country, we have strongly grasped the blue flag of the Union and our Youth leads various initiatives related to the future and committed to the great change that the planet is undergoing. Basque Youth have debated in a special way -and continue to do so- on sustainability, the climate and the environment,” indicated the Director of Foreign Action of the Basque Government.

According to Antón, “Basque Youth play one of the most valuable roles in the design of the European project. For this reason, the work, contributions and conclusions that we develop here today are in line with the three institutions of the Union”.

The director of Foreign Action considers that “the European Strategy for the Youth Sector 2030, adopted by the Council of Europe at the beginning of 2020, is a reference, especially with the situation that we are still experiencing with covid-19. It constitutes a guide to the policies to apply in the youth sector in the period 2020-2030”.

“The Civic Spaces for Youth must be promoted from sub-state policies. With this, they will constitute a reflection of the closest, local and regional environment and will represent an opportunity to develop in them the policies and strategies agreed upon in the European Union for their future,” adds Antón Zarragoitia.

“We are also committed to ensuring that civic spaces and meeting, collaboration and participation frameworks for Youth are forums in which dialogue between Youth and the Elderly is prioritized. Entrepreneurship promoted, there is Youth Migration that, thanks to training and involvement, participates in the development of the Union. Special attention be paid to the role of young women; emancipation is promoted, advanced systems of youth participation are defined, thanks to an institutional and social dialogue; online tools and communications are available in youth participatory processes; and the impact of Covid on the health of young people is taken into account.”

Mrs Despo Sergiou said “The European Year of Youth has been established in a very particular context. It is clear to us that the European Union must step up to meet young people’s expectations and their needs for a better future. After such a difficult period, where young people demonstrated great solidarity towards older generations most at risk in the pandemic, the Commission is honouring young people, their determination, courage and spirit”.

In the opinion of the high representative of the EU Commission, “It´s a year to listen, to involve and to empower Youth and to truly put the future in their hands. This is why we proposed 2022 as the European Year of Youth, a year dedicated to empowering young people. Europe needs the vision, engagement and participation of all young people to build a better future, and Europe needs to give young people opportunities for the future, a future that is greener, digital and more inclusive.  With the European Year of Youth, we are building capacity for youth participation among young people and among all stakeholders, who work to represent their interest and to advance the youth perspective in further initiatives and activities of the European Union”.

“The activities, events and deliverables of the European Year of Youth will focus on what matters most to young people, embodied in the eleven Youth Goals of the EU Youth Strategy and the eight priority topics of the Year: Green; Digital; Culture; Heath, well-being & Sports; European learning mobility; Employment and inclusion; Policy dialogues and participation; Youth and the world”, Despo Sergiou said.

“Our new innovative engagement tool, the Voice recording platform; is an online 3D digital platform, where young people can record their voices in their own language expressing their ideas, hopes and dreams about the future of Europe. They can do so under the different policy areas of the Year.  We hope that it is going to be an exciting digital journey where the young generation can voice their visions”.

The meeting was attended by Despo Sergiou, deputy of the Directorate General for Youth of the European Commission, Rafaél Lopez-Arostegi (Social Policy Advisor of the Department of Equality, Justice and Social Policies), María Rodriguez of the European Youth Council; Iñaki Bustamante of Euro Getxo. And with Juan José Gómez from the Helduak Association; Javier Gainzarain, Mariano Sanchez, Director of the Macrosad Chair of Intergenerational Studies at the University of Granada; Maialen Olabe, President of the Youth Council of Euskadi, and Agurtzane Llano, Director of Youth of the Basque Government.

The Basque Youth Observatory, of the Department of Equality, Justice and Social Policies of the Basque Government, has highlighted the high degree of confidence of the youth of Basque Country - 68% - in the European Union, its institutions and its activity.

Throughout 2022, the European Union develops the European Year of Youth. The objective proposed by the President of the European Commission, Ursula Von der Leyen, is the integration of young people and their priorities at all levels of the decision-making process, as well as the organization of activities and programs focused on youth.

The Basque Youth Observatory offers a global vision of the level of confidence of the youth of the Basque Country in the European Union. To do this, the results of the study “Basque Sociometer 74” that the Basque Government's Sociological Prospecting Office published in autumn 2021 taken as a basis.

This study based on a survey, which, among other questions, asked about trust in the European Union. According to the results of this survey, two out of every three young people in the Basque Country between 18 and 29 years old (68%) trust the EU.

The percentage of young people who trust the EU is higher than the general average of the Basque population (59%) since youth between 18 and 29 years of age are the age group that shows the greatest trust in Europe.